Today on Museum Bites we’re sinking our teeth into cheese. Mmmm…cheese! We bake, cube, grate, melt, slather, whip, and dip this savory superfood. Just a spoonful of cheese jazzes up our pasta complements our wine and helps make the broccoli go down. From prehistoric Poland to America’s Dairyland join me for a brief look at cheese’s rich and tasty history. We begin in the desert…

Cheese Lore: There is much lore surrounding the discovery of cheese, but the story most often repeated involves a nomadic tribesman and a flask of milk made of sheep’s gut. When it came time to quench his thirst, the tribesman took a swig from the flask and instead of a delicious glug of milk he got a mouthful of curds and whey (think cottage cheese). A combination of heat from the desert sun and rennet, an enzyme from the sheep’s gut, had caused the milk to curdle, thus producing cheese. Another story claims cheese was first made when fruit juice was added to milk. The acid from the juice caused the milk to curdle and voilà! Cheese!

Fun Cheesy Fact #1: Thomas Jefferson is credited with introducing mac n’ cheese to the United States. While living in Europe, Jefferson fell in love with the many pasta and cheese dishes that were on the menu. When he returned to his new country he brought back recipes and a pasta maker. And, in 1802, he arranged for White House chefs to whip up a batch of mac n’ cheese for a state dinner.

Cheese Mixin’:  Milk, bacteria, and rennet—an enzyme added to clot the milk—are the basic ingredients needed to make cheese. To begin, a starter culture (aka bacteria) is added to pasteurized milk* in order to ferment the lactose (i.e., milk sugar) and transform it into lactic acid. Next, rennet is added and the resulting gelatin substance is cut, stirred, and sieved to separate the curds (i.e., cheese) and whey—watery milk substance leftover after curds have formed. Salt and other mixins such as blue mold for gorgonzola are added and the mixture is then poured into containers. Softer cheeses, such as feta are stored in a brine solution. The cheese is kept in storage and aged anywhere from a few days to several years. The longer a cheese ages, the higher the concentration of lactic acid and sharper the taste. It takes approximately 10 lbs. of milk to make 1 lb. of cheese. Click on this Chemistry of Cheese video clip produced by the American Chemical Society to see the cheese making process in action.

Fun Cheesy Fact #2: The majority of cheese is made from the milk of cows, sheep, and goats. But cheese has also been concocted from the milk of alpacas, camels, deer, donkeys, horses, llamas, water buffalo, and yaks.

Everybody Loves Cheese:  Although we do not know exactly who whipped up the first batch of cheese, we do know it has been a popular go-to food for many millennia. The oldest evidence of cheese dates back 7,000 years to the Neolithic era. Scientists excavated ceramic sieves once used to process cheese at several dig sites in modern-day Poland. The ancient Egyptians also had a taste for cheese and packed their tombs with jars filled with the salty snack in preparation for their journey through the afterlife (Click on this Museum Bites: The Game of Life link to learn more). Homer’s epic poem, the Odyssey, provides evidence that the ancient Greeks were also in the cheese making business. Homer writes of Odysseus and his men stumbling upon caches of milk and cheese inside the fateful cave of Polyphemus, the man-eating cyclops. It was the Romans, however, who first mass-produced cheese, turning out aged and smoked varieties. With an eye on their ever-expanding empire, the Roman military provided their troops with ample K-rations complete with cheese. This tasty treat had a relatively long shelf life, was easy to transport, and an excellent source of protein. A necessary nutrient after a long day of marching and marauding. After the Roman Empire fell, monks became master cheese makers during the Middle Ages.

Fun Cheesy Fact #3: The pilgrims packed the Mayflower with provisions of cheese to help see them through their fateful trip across the Atlantic. 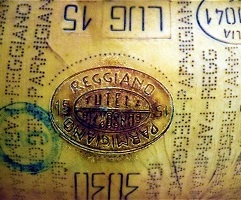 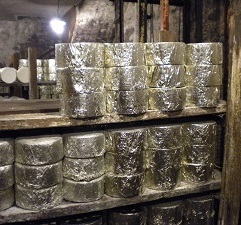 My Cheese is Better than Your Cheese:  For centuries, cheese has been produced on local farms. Like wine making’s terroir, various towns and regions throughout the world have cultivated their own style and flavor of cheese using local ingredients and methods of production. Specific types of cheese were often named after the town or region where they were first created. For example, Parmigiano Reggiano (aka parmesan) originated in the Italian provinces of Parma, Reggio Emilia, Modena, and parts of Mantua and Bologna. Emmentaler (aka Swiss cheese) was first made in the Emme River Valley of Switzerland, and Roquefort is named for the French village where it is tenderly aged in limestone caves. Official decrees and stamps of authenticity help ensure cheese lovers are feasting on the genuine product.

Fun Cheesy Fact #4: Swiss cheese gets its holes from Propionibacterium freudenreichii. This microbe releases carbon dioxide during the aging process, which blows holes or “eyes” in the cheese. Propion also gets credit for producing Swiss cheese’s mild, nutty flavor.

America’s Dairyland:  Cheesemaking began in Wisconsin in the 1840s. Wheat was initially the prime crop of Wisconsin farms, but production was fraught with variable yields, depleted soil, competition from neighboring states, and wheat devouring chinch bugs. When wheat farming moved West, Wisconsin mills were converted to papermaking and farms transitioned to producing dairy (Click on this Museum Bites: Paper Town link to learn more). Entrepreneurial New Yorkers, as well as Swiss immigrants, brought their cheese making talents to the state. Compared to other dairy products, cheese was more difficult to produce, but it had the advantage of a longer shelf life. Soon the demand for cheese was on the rise and cheese making shifted from the farm to the factory. At the end of the Civil War, Wisconsin boasted 30 cheese factories. Factory cheese was considered far superior to farm cheese because the quality and taste were consistent. By the 1920s, almost 3,000 cheese manufacturers were operating in Wisconsin. In 1921, Wisconsin became the first state to grade their cheese. And today, America’s Dairyland (aka Wisconsin) is the number one producer of cheese in the United States, pumping out a whopping 3 billion pounds each year. I’m a devout cheesehead, but lived in California for several years and enjoyed watching these commercials poking fun at Wisconsin dairy. For a good laugh click on Wisconsin Tourists and Happy Cows commercials courtesy of YouTube.

Fun Cheesy Fact #6:  Cheese curds are a Wisconsin delicacy and bucket list dish. They are typically made from cheddar cheese and served either plain or deep fried (think tater tots with cheese inside!). If you’re ever in America’s Dairyland I highly recommend beer battered deep fried cheese curds with ketchup.

That wraps up our tour of Green Bay, Wisconsin. Next week, we’ll be taking a closer look at nail art. Until then, have a fantastic week!

Museum Bites: The Game of Life