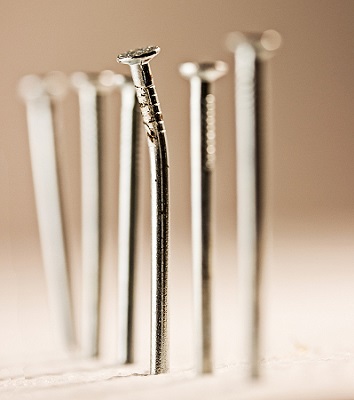 Today on Museum Bites we’re celebrating nails. Yay nails! Despite taking a beating, the no-nonsense nail keeps it all together. Whether common or finishing this simple fastener props up our art, keeps our homes and buildings intact, fosters community, provides a unique form of acupressure, and gets hammered into clever forms of art. Join me for a brief bite into the unassuming nail.

If your only tool is a hammer then every problem looks like a nail.
~ Abraham Maslow 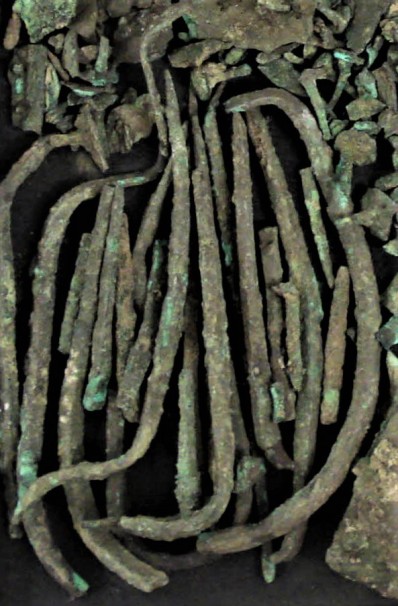 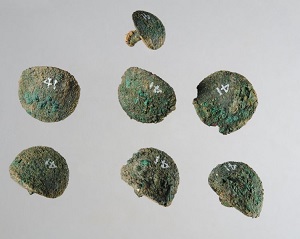 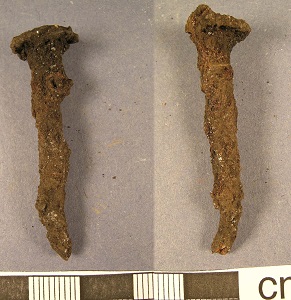 Tale of the Nail:  Nails have a long history. The oldest nails on record hail from Egypt and date back more than 5,000 years. These ingenious metal fasteners provide clues into the authenticity of antiques and were once a hot commodity in the American colonies. Colonists were so desperate for nails, a Virginia statute in 1645 prohibited burning down abandoned buildings for the intent of scavenging nails. It was not uncommon for colonists to while away their evenings and rainy days sitting by the fire and forging nails. During the late 1700s, nail-making machines revolutionized the industry. Production increased, nails became more specialized, and the price eventually dropped. From slender finishing nails to hefty railroad spikes, modern-day nails come in a variety of shapes, sizes, and materials including copper, bronze, iron, steel, aluminum, wood, and plastic.

Fun Nail Fact:  In 1794, Thomas Jefferson went into the profitable nail-making business by installing a nailery at Monticello. 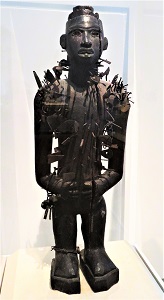 All Hail the Nail:  Nails also have the ability to heal. Infused with sacred powers, these nkisi nkondi were crafted in the Kongo and used to cure physical ailments, settle tribal disputes, fight off witchcraft, and punish lawbreakers. Packed with medicinal herbs that were sealed behind a mirror or piece of glass—the Kongo people believed reflective surfaces were a gateway to the spirit world—a nail or sharp object was pounded into the nkisi nkondi every time its spiritual force was needed to fix problems within the tribe. In the case of a dispute between tribe members, the participating parties would present their argument to the village elders. The issue was discussed and once resolved the adversaries drove a nail into the nkisi nkondi to seal the deal. Similar to a handshake after an argument. If either party went back on the agreement, the offender would face retribution from the powerful spirit within the nkisi nkondi. 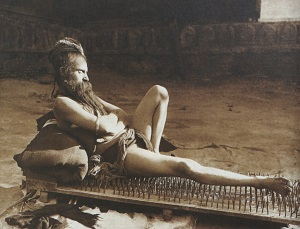 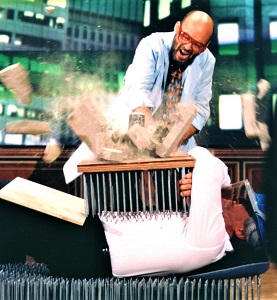 Former late-night host, Jay Leno gets in on the bed of nails trick. Photo by D. Willey, WikiMedia Commons

A bed of nails (think Uncle Fester of Addams Family fame) is another example of the mighty nail’s supposed healing powers. Yogis and fakirs have used beds of nails to enhance meditation. And the faithful swear by their ability to relieve muscle tension, back pain and a host of other ailments. If you’d like to geek out on the physics of these torture-esque devices, click on this Harvard University demo featuring the fearless Allen sandwiched between not one but two beds of nails. And don’t try this at home or anywhere… ever!

Upscale Nail:  Nails have a whimsical side too. Sculptor, David G. Partridge claimed he painted with nails. His sweeping murals, nicknamed Naillies, are a stunning example of how the simple, unadorned nail can be transformed into a dazzling work of art. Partridge’s low relief sculptures grace the walls of several public buildings in Canada including Toronto City Hall and York University’s Scott Library. 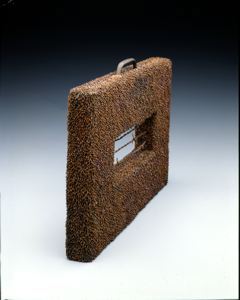 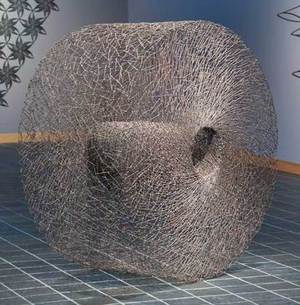 Nail aficionado and sculptor, James Bisbee’s mantra is “only nails, always different”. From shiny brads to rusty spikes Bisbee has bent, crimped, molded and twisted nails into a thicket of wildflowers, a wispy spool, a barbed briefcase, and much, much more. Click on this John Bisbee link to feast your eyes on his magnificent collection.

That wraps up our look at the wonder and whimsy of nails. Next week, we’re getting inked with a look into the fascinating history of tattooing. In the meantime, have a great week!

Museum Bites: If I Had a Hammer

University of Michigan Museum of Art