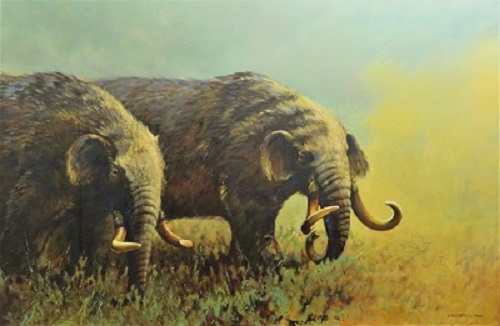 Today on Museum Bites we’re celebrating the humble mastodon (Mammut). Often overshadowed by the bigger, flashier wooly mammoth, the mastodon has the reputation of being the Jan Brady of the elephant family. But did you know a glass of rum, a prehistoric arrow, and a former U.S. president all played a role in the discovery and understanding of the mastodon?  Sink your teeth into these mastodon bites to learn more…

Like a Rolling Stone:  The first mastodon fossil was discovered in 1705 in the village of Claverack, New York when a 5 lb. tooth rolled down a steep hill and landed at the feet of a tenant farmer. He pocketed the fist-sized rock and promptly traded it for a glass of rum. The tooth eventually ended up in the hands of Lord Cornbury, the governor of New York. Cornbury packed the fossil off to London where it received further study.

What’s in a Name?   The mastodon was initially called, incognitum, Latin for unknown, since scientists had never come in contact with an animal of this type. Dinosaur discovery would not take place for another 100+ years. In 1806, French naturalist, Georges Cuvier (1769-1832) came to the rescue.  Perhaps he had been spending a little too much time in the field, but Cuvier believed the conical bumps on incognitum’s teeth resembled breasts. He christened the busty-toothed creature, mastodon—mastos meaning breast and odont meaning tooth, in Greek. It took some time, but the new name eventually caught on.

Nature of the Beast:  More mastodon bones were unearthed near our rum loving farmer’s tooth and American colonists were all atwitter. Rumors spread about a savage beast with jaws powerful enough to crush and devour elk, deer, and other woodland creatures. Still more molars popped up in South Carolina—in this case from a mammoth—and slaves recognized their similarity to elephant teeth. Bosom buddy, Cuvier compared mastodon and mammoth fossils with the skeletal remains of elephants and based on his research, developed a radical new theory. Cuvier claimed some species are extinct, challenging the conventional wisdom of the time which stated all species on earth are permanent and unchanging.

Seeing the Forest for the Trees:  Further study and many more fossils later, we now know that mastodons first appeared during the early Oligocene Epoch, approximately 33 million years ago. Mastodons were forest dwelling vegetarians who dined on leaves, twigs, and fruit. They stood anywhere from 8 to 10 feet tall, weighed 4 to 6 tons and sported a coat of long, shaggy hair. They had impressive 8 foot long tusks and males used them to spar during mating rituals.

It’s All in the Family:  Compared to its distant cousin the mammoth, mastodons were stockier and had flatter heads. Both animals had tusks and wooly fur, but the mammoth had ridged (as opposed to knobby) teeth, a design feature best suited for tearing up the grasses of the savanna, where the mammoth roamed. The mastodon was also more mature and veered off the elephant family tree much earlier than the mammoth. Mammoths appeared during the Pliocene Epoch, some 5 million years ago and are more closely related to the African elephant than the mastodon.

Bones to Pick:  Thomas Jefferson took a fancy to mastodon bones and directed Meriwether Lewis and William Clark to excavate and ship him any fossils found during their famous expedition.  Unfortunately, the explorers came up empty but Clark got a second chance in 1807.  Jefferson hired Clark to conduct a dig at Big Bone Lick, a site in Kentucky rich with fossils. Clark and his able-bodied crew unearthed a hefty bag of bones and shipped Jefferson three boxes brimming with mastodon and mammoth fossils.

The Long Good-Bye:  Mastodon extinction occurred toward the end of the Pleistocene era, approximately 10,000 to 12,000 years ago. There is no clear cut reason why the mastodons were wiped out. Several theories have been put forth including climate change, overhunting by early humans, and a pandemic of tuberculosis. In 1977, a spear tip was found embedded in the ribs of a mastodon excavated in Washington State. This added credence to the theory that mastodons were hunted by early humans. Tests revealed the wound was not fatal, and the mastodon lived for several more years.

The humble mastodon has played a significant role in understanding our evolutionary history and their massive bones are regularly stumbled upon even today. Click on this short time-lapse video to witness the re-construction of the Cohoes Mastodon, courtesy of the New York State Museum.

Next week we’ll be taking a look at ancient baubles and beads. In the meantime, have a great week!

One thought on “The Humble Mastodon”