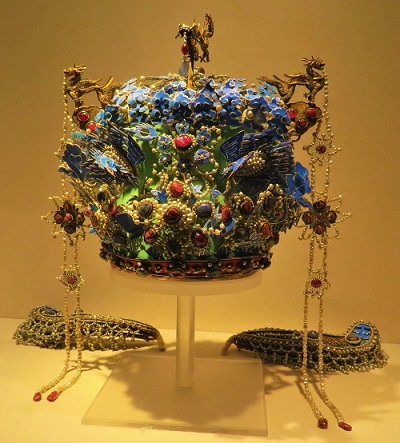 Today on Museum Bites we’re continuing our tour of the Forbidden City with a stroll through the Treasure Gallery and Hall of Clocks and Watches. Over one million artifacts, spanning China’s 5,000-year history are tucked away inside these mighty walls, but only a small fraction are on display. Join me for a brief look at these hidden treasures…

Dressed for Success:  Our first stop is the Treasure Gallery featuring baubles and beads worn primarily by members of the Qing Dynasty (1644-1911). After seizing control of China, the Manchus of the Qing Dynasty imposed a strict dress code. Status and rank determined what type of clothes and accessories could be worn. The more elaborate the dress, the higher up one was on the imperial ladder. Pictured here are a few examples of Qing fashion.

Members of the Qing imperial court were especially fond of inlay jewelry—gemstones custom cut and glue-set into open sections of jewelry, as opposed to mounted. The Empress’s elaborate headdresses are some of the most breathtaking items in the Treasure Gallery and an excellent example of inlay ornamentation.

Conquering in Style:  The Treasure Gallery is also home to several archers’ rings. Archery played a key role in not one but two foreign conquests of China. Genghis Khan’s fierce mounted bowmen helped conquer China in the 13th century. History repeated itself in 1644 when skilled Manchu archers—our persnickety fashionistas from the Qing Dynasty—assisted in the coup d’état of the Ming government (1368-1644).

The two thumb rings featured here are not only stylish but practical archery accoutrement.

Hickory Dickory Dock:  In addition to snazzy headgear and jewelry, the Forbidden City also boasts a delightful collection of antique clocks. Over 200 timepieces are on display in the Hall of Clocks and Watches. Prior to the 17th century, the Chinese marked time with sundials and water clocks. In 1601, Emperor Wanli (1527-1620) received two chiming clocks from Italian missionary Matteo Ricci. The emperor was hooked and a legacy of clock collecting ensued. The Bureau of Chiming Clocks was established and dedicated to the preservation, repair and production of clocks. Subsequent emperors have added to the collection. Pictured here are a couple of whimsical examples.

Rock of Ages: Our final exhibit contains a fascinating display of ancient stones dating back to 374 BCE. These stone drums—so called because of their drum-like shape—are inscribed with pictures and poetry singing the praises of leader, Xiangong Qin (424-362 BCE) of the Zhou Dynasty. Carvings on the Wu Che stone featured here include hunting scenes and lines of text lauding Qin’s rich and powerful lands.

That wraps up our Chinese adventure and tour of the Forbidden City. We’ve only touched on a small fraction of the treasures within this grand fortress. If you’d like to learn more, click on this Forbidden City Treasure Gallery link. Next week, we’ll return to my home base, the Michigan State University Museum, with a peek into the life and times of the humble mastodon. See you next week!

Unbound: How Eight Technologies Made Us Human, Transformed Society, and Brought Our World to the Brink, (2015) by R.L. Currier

One thought on “Treasure Palace”