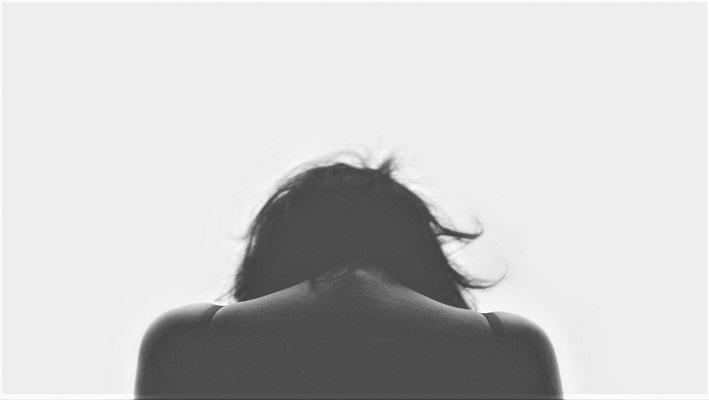 Today on Museum Quick Bites we’re taking a closer look at a Biblical bargain. Jephthah’s Daughter (1874) by Chauncey Bradley Ives is a stunning sculpture depicting a young woman’s grief upon learning she will be sacrificed (spoiler alert!)…by her father. With head downcast, a tambourine grasped loosely in one hand, she contemplates her tragic fate.

Zoom in and notice the designs on her veil, as well as the embroidery and fringe of her dress. The flowy folds of her clothing are so fluid, so lush it’s easy to forget Ives crafted this beauty from cold, hard marble. Standing before her, I half expected her to heave a shaky sigh. But why you ask, is she to be sacrificed?

The story of Jephthah’s daughter comes from the Old Testament’s Book of Judges. Jephthah was an Israelite leader, who made a bargain with God. If the Lord delivered him a victory over the Ammonites, Jephthah would sacrifice the first person to come out of his house upon his return. Jephthah and his troops go on to defeat the Ammonites and post-victory they head back home. Catching sight of her long-awaited father, Jephthah’s daughter (she was not named in the Bible) burst from the house to greet him. She danced and shook her tambourine with joy, until she noticed the horror-stricken look on her father’s face.

Unmarried, a virgin, and Jephthah’s only child, the young woman told her father he must stick to the bargain. She did, however, show some chutzpah. Before she was to be killed, she asked and was granted two months off to spend some girl-time in the mountains with her friends. They apparently whiled away the hours mourning her virginity. At the end of her two-month reprieve, Jephthah’s daughter was sacrificed by her father with no intervention from God, like with Abraham and his son, Isaac. Subsequently, Israelite women mourned this innocent young woman for four days each year.

Chauncey Bradley Ives (1810-1894) was born on a farm near Mount Carmel, outside of Hamden, Connecticut. At age 15, he began an apprenticeship as a woodcarver in New Haven. In his mid-20s, Ives moved to Boston, and within a few years enrolled in the National Academy of Design in New York City. After completing his studies, Ives set up shop in Florence, Italy where he developed a reputation for crafting portrait busts of wealthy Americans. In the 1850s, he relocated to Rome. The state of Connecticut commissioned Ives in the 1870s, to create two statues of famous people from his home state to be placed in the US Capitol. In 1894, he died in Rome at the age of 84.

Ives specialized in neoclassical sculpture and made multiple copies of each of his works. You can find his breathtaking sculptures in and around government buildings, college campuses, and museums throughout the country. If you’d like a virtual tour of his work, click on this Chauncey Bradley Ives link, courtesy of Google Arts & Culture and this Yale University of Art Gallery link.

Fun Art-y Fact: One hundred statues, two from each state, reside inside the United States Capitol Building. Statues are gifted from each state and represent a notable citizen. The statues range from our founding fathers to 20th century entertainers. Click on this Architect of the Capitol link for a virtual tour.

That wraps up our look at Jephthah’s Daughter. I’ll be back next week, with more Museum Quick Bites. In the meantime, be safe, be kind and take care 🙂

Architect of the Capitol: Connecticut

This site uses Akismet to reduce spam. Learn how your comment data is processed.