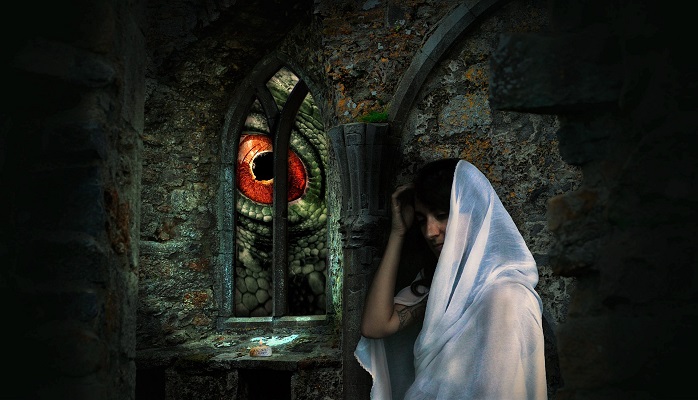 Happy Friday! Today on Museum Quick Bites we’re taking a walk on the wild side with a divine dragon. Handcrafted from glazed terracotta and molded mud-brick, this Mushhushshu-Dragon (c604-562 BCE) once graced one of the eight gates surrounding the ancient city of Babylon.

Don’t be fooled by this creature’s wide-eyed gaze and casual swagger. This kitty has claws…and fangs! Sporting the head of a serpent, tail of a scorpion, and legs and feet of a lion and eagle, the fearsome Mushhushshu was the symbol of über-god, Marduk. His gnarly image was meant to not only impress, but intimidate, like the massive walls and gates surrounding his patron city of Babylon.

Zoom in and notice the curly-cue horns, vicious fangs, scaly body, lethal talons, and spiked tail. This badass god struck fear into the hearts of Babylonians, and his formidable reputation stretched far beyond the borders of this ancient land. Multiple rows of Mushhushshu dragons and snarling bulls, representing the god of storms, Adad, lined the gates of Babylon. They served as an ancient billboard broadcasting the message, Don’t Mess with Babylon!

Located in modern-day Iraq, the city of Babylon was established sometime during the 3rd millennia BCE. Centuries later, Nebuchadnezzar II (c630-561 BCE) commissioned many of the city’s most famous building projects, including the Tower of Babel, Hanging Gardens, and the massive mud-brick walls and gates. Big, blue, and beastly the eight double gates measured more than 38 feet (12 meters) in height.

I laid huge cedars lengthways for the roof. Door leaves made of cedar wood, clad with bronze; I attached a threshold and hinges, cast from ore, to all the doorways. I set irrepressible bulls and angry dragons in the gate area…
~ Excerpt from Nebuchadnezzar II’s inscription on the Ishtar Gate

The main gate was dedicated to Ishtar, the goddess of love and war. Visitors had to walk beneath rows of brightly colored Mushhushshu-dragons and Adad-bulls through not one, but two gates. Once inside they spilled out onto Processional Way, a ½ mile long thoroughfare flanked by a series of snarling, life-sized lions, a symbol of Ishtar. The entire ensemble was designed to impress and intimidate not only visitors, but the citizens of Babylon.

Fun Babylonian Fact: Babylonians believed their ruler was the embodiment of the god, Marduk. Each year, the king hosted a New Year’s festival where The Babylonian Creation story, which portrays Marduk’s triumph over the evil goddess, Tiamat, was read. This served as a blatant reminder of their divine leader’s ruthless and far-reaching power.

He [Marduk] turned back to where Tiamat lay bound, he straddled the legs and smashed her skull (for the mace was merciless), he severed the arteries and the blood streamed down the north wind to the unknown ends of the world.
~ Excerpt from The Babylonian Creation, The Humanistic Tradition Volume 1: Prehistory to the Early Modern World (2015) by Gloria Fiero

For centuries, Babylon lay forgotten beneath the desert sands, until 1897, when German archaeologists Robert Koldewey (1855-1926) and Walter Andrae (1875-1956) began excavating the city. They and their team meticulously unearthed the fragile, mudbrick remnants and slowly began reconstructing portions of the city. They also sent 900 boxes of fragments back to Germany in an effort to rebuild the smaller section of the Ishtar Gate.

This breathtaking portal, along with Mushhushshu, is on display in the Pergamon Museum in Berlin. You can also find panels from the Babylonian gates and Processional Way in several museums throughout the world, including the Detroit Institute of Arts, Metropolitan Museum of Art, and Royal Ontario Museum.

To learn more, click on this virtual tour of Babylon and the Ishtar Gate link, courtesy of Google Arts & Culture. If you’d like to read more about imposing fortresses, click on this Museum Bites: Gate Crashing link.

That concludes our brief look at the dragons of Babylon. I’ll be back next week with more Museum Quick Bites. In the meantime, be safe, be kind and take care 🙂

National Geographic: Inside the 30-Year Quest for Babylon’s Ishtar Gate (2018)

The Humanistic Tradition Volume 1: Prehistory to the Early Modern World (2015) by Gloria Fiero