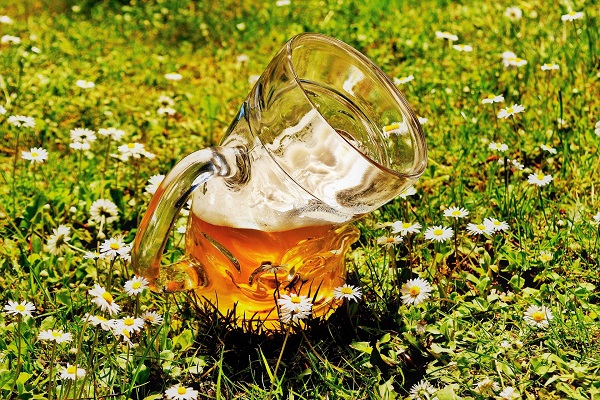 Dear Readers — Happy Fall! I hope you all are doing well. Today on Museum Bites we’re dipping into the archives. Please enjoy this reboot of It’s a Crock! originally posted on September 27, 2019.

Today on Museum Bites we’re sampling crockery with a twist. These deceptively simple mugs and jugs were crafted for pure trickery and played a starring role in the 18th-century’s version of beer pong. Join me for a look at three of these clever devices…

Not Your Grannie’s Teacup:  Our first tricky bit of crockery is a tin-glazed earthenware mug that was handcrafted in England during the mid-1700s. But don’t be fooled by the chipper floral pattern, because this is not your grandmother’s teacup. Instead, this mug was designed for a pub swilling drinking game. Dotted with holes and cutouts, a simple tip and sip from this cup leaves the drinker doused with brew.

The object of the game is to be the first to finish one’s drink without spilling or using any sort of device for assistance. The hollow handle and rim inside the puzzle mug provide a channel to slurp up brew via one of the spouts jutting out from the rim. The trick is to create suction by slurping (think straw) through one spout while blocking a certain combination of holes hidden beneath the spouts and in some cases the handle. Click on this Puzzle Jug video link to learn how these clever devices are made and used, courtesy of the Victoria and Albert Museum.

Fun Crockery Fact #1:  The ancient Assyrians were the first to craft tin-glazed earthenware approximately 3,000 years ago. The glaze contains tin ashes or tin oxide and creates a distinctive milky finish. This type of pottery is referred to as majolica in Italy, delftware in the Netherlands and United Kingdom, and faience in France, Germany, Spain, and Scandinavian countries.

Showy Touches:  The puzzle jug is a larger version of its wee cousin, the puzzle mug and ups the bragging rights of the pub game. Dotted with a fair amount of holes and floral cutouts this tricky bit of crockery is sure to drench the fooled and foolish. The round channel running through the center is a showy touch.

Like the puzzle mug, this jug has three spouts bordering the hollow rim. However, two hands are needed to block secret holes in the rim and handle. Once suction has been attained, the gamer must then attempt to drink up the brew. This jug is also from England and made of tin-glazed earthenware. The Asian motif was an attempt to mimic Chinese porcelain.

Try how to drink and not to spill,
And prove the utmost of your skill.
Taunt on English puzzle jug (c1770-1775), Victoria & Albert Museum

Deceptively Simple:  Our final bit of crock also hails from mid-18th century England, but it lacks the flash of the previous puzzle jug. Sporting only a sparse number of holes and no cutouts, this jug can hold much more brew. And begs the question, was it designed to soak the unwitting person’s clothes or force the pub-gamer to consume copious amounts of brew?

Like our previous bits of crockery, the drinker must block hidden holes and begin the task of slurping up the brew. One go at this particular jug, especially if it was filled to the line of holes, would no doubt knock a player back on his or her heels…and hightailing for a water closet.

This deceptively simple jug is made of salt-glazed stoneware, which is produced when salt is added to the kiln. The result is a clear, slightly bumpy, orange-peel texture. Salt-glazing was first used in China during the Shang Dynasty (c1600-1046 BCE). Click on this Science of Salt-Glaze Pottery video link courtesy of KQED and enjoy a demonstration.

That wraps up our look at puzzle jugs and mugs. Next week I’ll be back with more Museum Bites. Until then be safe, be kind and take care 🙂