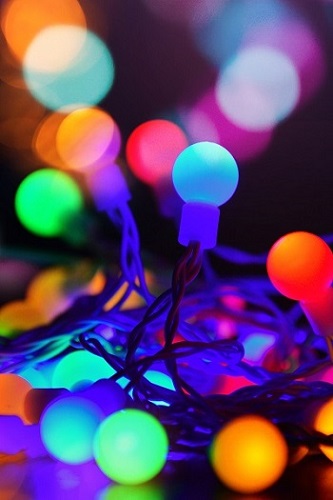 It’s beginning to look a lot like Christmas here at Museum Bites and today we’re celebrating some of the generous gift givers featured in Christmas lore. Santa Claus, Father Christmas, and Saint Nicholas get top billing. But did you know Father Ice, a mischievous farm elf, and a leather-wearing Santa have all played a role in fostering Christmas cheer? Join me for a brief introduction to these festive folks. We begin in the wilds of the American frontier…

Pioneer Santa:  When Europeans began colonizing the Americas, they brought with them many of their old world traditions. Each Christmas, Christian children anxiously awaited the arrival of Saint Nicholas. But the pious old bishop with miter and gilded robes was considered too posh for the rugged New World lifestyle. Enter the rough and tumble, Pioneer Santa, a cross between old world Saint Nicholas and American frontier badass Daniel Boone. Sporting buckskins and carrying a modest sack of toys, Pioneer Santa delivered a more homespun holiday. 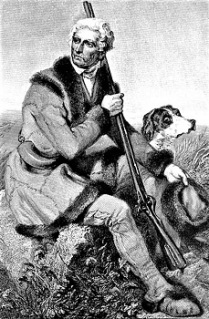 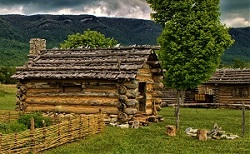 Fun Frontier Fact: Daniel Boone (1734-1820), was an American frontiersman and soldier known for his exploits in Kentucky and the Appalachian Mountains. He played a key role in constructing the Wilderness Road, a trail that stretched ~200 miles through the Cumberland Gap between Kentucky and Virginia. Boone also fought in the French and Indian War (1754–1763), and was immortalized in John Filson’s book, Life and Adventures of Colonel Daniel Boone (1823) and later in a TV series aptly titled, Daniel Boone (1964-1970). Click on this History Channel link to learn more about his legacy. 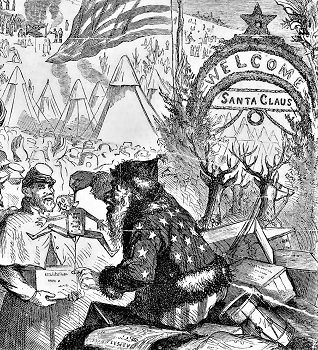 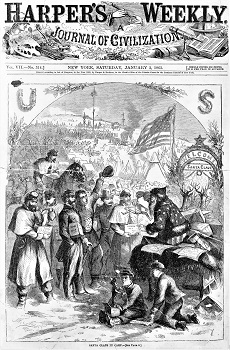 Civil War Santa:  Tricked out in patriotic stars and stripes, Civil War Santa was created by cartoonist, Thomas Nast (1840-1902). Featured on the cover of Harper’s Weekly in 1863, Civil War Santa sits atop his reindeer-drawn sleigh doling out presents to weary troops. During the Civil War, Christmas Day offered a respite from the fighting and an opportunity for soldiers to imbibe. Back home Christmas was typically a low key affair. Families sent soldiers care packages of food and clothing, but the holiday was often a sharp reminder of the hardships and painful separations caused by the war. This nationwide longing paved the way for our romanticized images of being home for the holidays. In 1870, the postwar Congress passed legislation making Christmas as well as New Year’s, Independence Day, and Thanksgiving, federal holidays.

Wartime Fact: Thomas Nast was born in Landau, Germany and moved to New York with his family at the tender age of 6. He is best known for his political cartoons during the mid to late 1800s. Abraham Lincoln referred to Nast as “our best recruiting sergeant” because of his illustrations depicting the horrors of slavery.

Farm Elf:  Characterized by his impish behavior and garden gnome vibe, our next Christmas character, the Nisse, hails from Denmark. Nisse is responsible for protecting the family farm, but he has a tendency toward mischief and pranks. But don’t despair! Like a Halloween trickster, Nisse can be placated with treats. A steaming bowl of julegrøt (Christmas porridge) left out for him on Christmas Eve will mollify this mischief maker. But don’t forget the butter or you’ll suffer Nisse’s wrath! Click on this When the Nisse Got No Butter on His Christmas Porridge link to listen and learn more about this mercurial elf.

Fun Festive Fact #1: Saint Nicholas (c280-343) was the former bishop of Myra (modern-day Demre, Turkey). Known for his benevolence, Saint Nicholas is the basis for many of our Christmas gift givers, including Santa Claus, Kris Kringle, Father Christmas, and Father Ice. In many European countries, the Feast of Saint Nicholas is a separate holiday celebrated on December 6th. Saint Nicholas (aka Sinterklaas) is an especially big hit in the Netherlands. Donning a bishop’s miter and red and gold-trimmed robes, Sinterklaas and his Zwarte Pieten sail into Dutch towns amid much fanfare. Click on this Museum Bites: Sinterklaas link to learn more about the life and celebration of Saint Nicholas.

Father Ice:  Russian folklore features stories of Ded Moroz (aka Father Ice), a mythical, sleigh-driving figure known for gifting those who are kind and hardworking while punishing the lazy and cruel. Ded Moroz’s judgy deeds are depicted in a Cinderella-esque folktale about a wicked stepmother tossing her sweet-tempered stepdaughter out into the cold. Moroz took pity on the girl and gifted her with diamonds. Upon learning of her stepdaughter’s fortune, the wicked stepmother threw her bratty daughter out into the cold with the hopes of scoring some bling. The daughter threw a temper tantrum and like Elsa of Frozen, Ded Moroz cast the obnoxious girl in ice. Modern-day Moroz and his assistant, Snegurochka the Snow Maiden deliver presents to kindly folk on New Year’s Eve.

Fun Festive Fact #2: Kris Kringle is a blend of both Santa Claus and Saint Nicholas celebrated in Austria, Germany, and Switzerland. Wearing white robes and carrying a small Christmas tree, the radiant Kris Kringle delivers presents by entering an open window. Upon exiting, the conscientious Kringle rings a bell to let the occupants know he has made good with the gifts.

That wraps up our look at some of our lesser-known gift-giving Christmas characters. Museum Bites will be off making merry for the next three weeks. However you celebrate, I wish you and yours a fun and relaxing holiday and the happiest of New Years!

And just one more thing…If you’d like to learn more about Solstice (happening in Northern Hemisphere on Saturday, December 21 at 11:19 PM Eastern Time) click on this Museum Bites: Here Comes the Sun link.

Five Minute Folklore: When the Nisse Got No Butter on His Christmas Porridge