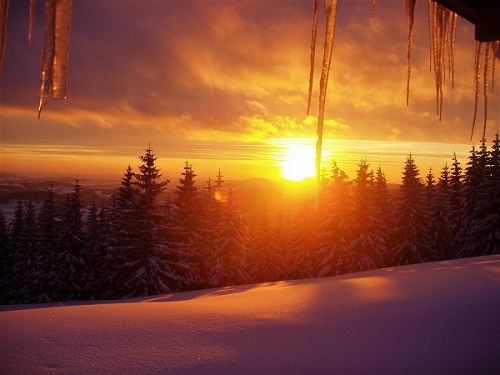 Today on Museum Bites we’re brewing up a hot mug and settling in to celebrate winter solstice. Despite being the shortest day of the year, winter solstice is a time to rejoice. Of course, you may not be in the mood for confetti and a balloon drop when you’re slogging through the snow and dark but take heart. Solstice is a turning point on our celestial calendars. Henceforth our days will gradually be filled with more daylight until we reach summer solstice in June, and the process reverses itself. Those living down under, in the Southern Hemisphere are experiencing the exact opposite. Their summer solstice (longest day of the year) occurs at the same time as the Northern Hemisphere’s winter solstice. Whether you live north or south, solstice will take place this year on either December 21st or 22nd depending on your time zone.

In ancient times, celestial events such as the solstice and equinox were guideposts, signaling when to plant, harvest, set sail and in the case of winter solstice, celebrate the return of the sun. Across the globe, monuments and temples have been built to track, showcase, and pay homage to these magnificent cosmic displays. Join me for a brief look at some of these amazing sites…

Rock Around the Clock:  The most famous place to ring in both winter and summer solstice is Stonehenge. Located on the Salisbury Plain in Wiltshire England, this ancient stone circle was built approximately 4,500 years ago by Neolithic tribes. Using only wood and stone tools, this massive construction project was completed in 3 distinct phases over the course of 500+ years. The henge’s outer ring is comprised of Sarsen stones that weigh anywhere from 20 to 30 tons and stand up to 30 feet (9 meters) tall. Weighing in at a mere 3 to 5 tons are the volcanic blue stones, which make up the inner circle.

The Sarsen stones are arranged in a trilithon formation with 2 posts and a tongue-and-groove lintel placed atop. The Great Trilithon, named for its superior height, is perfectly aligned to capture the winter solstice sunset. Standing within this mighty stone circle, the ancients witnessed the sun’s gradual descent between these great pillars. Having toppled over centuries ago, only one post of the Great Trilithon still stands today. This doesn’t deter the tens of thousands of people who visit Stonehenge each solstice to party like it’s 1999.

Click on this entertaining video clip by English Heritage to get a brief history and 360° view of Stonehenge. The baaing sheep in the background provide an authentic touch of atmosphere 😉

Constructed of wood, wire, and concrete, this “open-sky observatory” makes use of Babylonian, Celtic, Egyptian, Maori, Polynesian and modern science to capture and explain a variety of celestial events. Six heel stones located outside the henge are aligned with the rising and setting sun on winter and summer solstice, as well as the spring and autumnal equinox. The main circle is comprised of 24 pillars with corresponding lintels. This configuration creates windows which highlight specific constellations and stars. At the center of the stone circle is the pièce de résistance, a 16 foot (~5 meters) obelisk that points directly at the south celestial pole. Its shadow also plots the position of the sun amongst the stars at any given time. Click on this Stonehenge Aotearoa video to get an up close and personal look at this fascinating structure.

Down Under:  Our final solstice site is Maeshowe, located on the Orkney Isles off the northern coast of Scotland. This ancient tomb is almost 5,000 years old. Like Stonehenge, it was built by Neolithic people and contains standing stones. Aboveground this burial chamber looks like an unassuming, grassy mound situated in a lonely field.  But deep inside, a labyrinth of corridors and cramped rooms await. Devoid of corpses, this prehistoric mausoleum boasts Viking graffiti and an entryway sporting stones weighing more than 20 tons.

During sunset on winter solstice, beams of light pour into the inner chamber and illuminate the Barnhouse standing stone located on the facing wall. Some have theorized the ancients intentionally created this phenomenon to symbolize the continuance of life. Click on this Historic Environment Scotland video clip to take a virtual tour through Maeshowe.

Fun Shadowy Fact: Our longest noontime shadows will occur on winter solstice. So grab your coat, run outside and check it out. And since all things are opposite in the Southern Hemisphere, I encourage our neighbors down under to pop on some flip flops and hustle outside to witness your shortest noontime shadows of the year. If you’d like to geek out on solstice and learn more about why it does not occur on a fixed date, or when solstice will arrive in your hometown, click on this Time & Date link.

That wraps up our look at just a small fraction of the structures built to honor solstice. Of course, you do not need an ancient temple or burial ground to celebrate. A hot, tasty mug of brew and a toast to the setting solstice sun will also suffice.

Museum Bites will be back in a few short weeks with new museums, ancient sites, and quirky and fascinating bits from the past. In the meantime, I wish you a festive holiday and the happiest of new years!