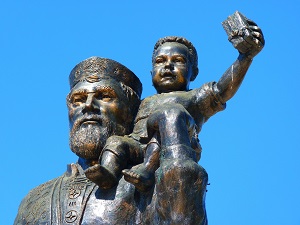 Today I’m embracing my Dutch heritage and delving into the history of Sinterklaas, aka Saint Nicholas.  Nikolaos of Myra (c280-343) was born in Patara, Lycia, a coastal town located in modern day Turkey.  Orphaned at a young age, Nikolaos became a devout Christian and used his inheritance to help the needy.  He was ordained a priest and eventually became the bishop of Myra, (modern-day Demre, Turkey).  He continued his work with the poor and gained a reputation for his generosity and gift giving.  Nikolaos died on December 6, 343 and was buried in Myra.

In 1087, his relics (bones) were exhumed and secretly transported to Bari, Italy (at the time part of Spain) by a band of sailors and merchants after Myra was conquered by the Saracens.  After his death, legends of Nikolaos’s benevolence spread throughout the Mediterranean and Europe.  He reportedly saved three young sisters from entering prostitution by secretly leaving bags of money inside their home so their penniless father could pay for their dowries.  Nikolaos also appeared in a vision and guided sailors safely through a violent storm.  By far the most remarkable story credits him with bringing back to life three boys hacked to death by a butcher. Nikolaos’s tomb is located in the Basilica di San Nicola, in Bari, Italy.

Today, Christians around the world honor Nikolaos of Myra on his feast day, December 6th.  The Dutch in particular, roll out a huge celebration.  In mid-November, amid much fanfare, Sinterklaas (Saint Nicholas) and his controversial helpers, the Zwarte Pieten (click on Zwarte Piet to learn more) arrive by a steamboat from Spain.  Over the next several weeks, Sinterklaas and the Zwarte Pieten make stops around town, handing out candy and checking on the Dutch children’s behavior.  By day they can be seen visiting hospitals, schools, shopping malls and other public venues.  By night, Dutch children place a shoe by the fireplace or radiator and fill it with treats for Sinterklaas’s horse (carrots, sugar cubes).  In return, Sinterklaas rides his horse across the rooftops and the Zwarte Pieten sneak down chimneys and collect the horse snacks.  They also leave well-behaved kids small treats, typically chocolate letters, pepernoten (spiced cookies), marzipan, and other sugar-filled goodies.  The naughty kids receive a chunk of coal.  In the not too distant past, Sinterklaas also threatened to beat the naughties with a switch.  And if that weren’t enough, the Zwarte Pieten would stuff the horrible kids into a sack and whisk them away to Spain.

All this excitement culminates on the eve of December 5th when children young and old await Sinterklaas’s loud banging on the front door.  Is that a switch he’s using to beat on the door?  Are the Zwarte Pieten preparing to drag a bratty little brother off to Spain?  Not this time.  Sinterklaas is letting you know his sack of gifts have arrived on your front porch and he and the Zwarte Pieten are hightailing it back to Spain. The rest of the evening is spent opening gifts and feasting on good food.  Older kids and adults also share presents and personally written poems.

Sinterklaas is not to be confused with Santa Claus or as the Dutch call him, Kerstman (Christmas Man), who arrives from Lapland to deliver gifts on Christmas Eve.  In the United States, Sinterklaas and Nikolaos of Myra morphed into Santa Claus as a result of the stories and traditions brought to the New World by Dutch settlers, and the writings of Clement Moore (1779-1863) and Thomas Nast (1840-1902).  Click on this History of Santa Claus to learn more.

Fortunately, my own experience with celebrating Saint Nicholas was less dramatic—no beatings or threats of kidnapping 😉  Lacking a fireplace, my siblings and I hung our stockings inside a living room closet on the eve of December 5th.  We awoke the next morning to find our stockings filled with candy from good old St. Nick.  I’ve continued this tradition with my own family and encourage you to do the same, with a nod of appreciation to generous, gift-giving, Nikolaos of Myra.

Funny Folklore Facts:  Author and humorist, David Sedaris has written a hilarious account of how the Dutch celebrate Sinterklaas. Click on David Sedaris essay for a good laugh.

Fun Familial Facts:  Do you have some Dutch ancestry?  Following are the top 10 Dutch surnames and their meanings: