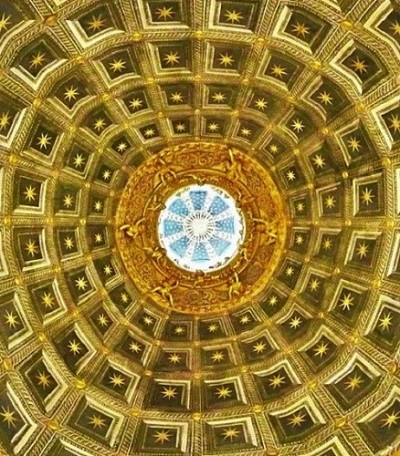 Today on Museum Bites we’re climbing the stairway to heaven, Italian style, with a floor-to-rafters tour of the Duomo di Siena. More than a thousand years of art and history are contained within the walls of this imposing cathedral. We’ll sample a small slice, but first a little history…

From Minerva to Magnificent:  Prior to the Duomo di Siena, an ancient Roman temple honoring the goddess, Minerva was formerly located on the cathedral grounds. In the 9th century, a smaller church occupied this space. Ground was broken on the current cathedral in 1196. For centuries, the Duomo was a work-in-progress that was interrupted in the mid1300s when the city was ravaged by the Black Death.

Initially constructed in the Romanesque style, construction in the 13th century veered toward a Gothic design. The Duomo, however, is no Winchester Mystery House. Its fussy façade, sweeping arches, and spectacular nave are evidence of the precision and backbreaking work that produced an extraordinary church and includes a baptistery, bell tower, crypt, library, and not one but two museums. Inside a vast collection of paintings, sculpture, mosaics, stained glass, and religious artifacts are on display. We begin our tour on the ground floor.

Floor Art:  Step inside the Duomo and once your eyes adjust, the expansive floor appears like an array of Turkish rugs. Fifty-six marble inlay and graffito mosaics create a colorful display beneath our feet. These works span from the 14th to 19th century and all but one were painstakingly crafted by Sienese artists.

The largest panels depict biblical stories including scenes from the life of Moses and the sacrifice of Isaac. The Slaughter of the Innocents (c1483) by Matteo di Giovanni (1430 – 1495) is particularly impressive and gruesome. It illustrates the story of the King of Judea, Herod the Great (73-4 BCE), ordering the massacre of babies in an effort to prevent a soothsayer’s prophecy that a newborn (aka Jesus Christ) would one day usurp his rule. Aside from the New Testament’s Gospel of Matthew, there are no historical records of this horrific massacre ever taking place. The subject matter, however, is a favorite topic of Giovanni. If you’d like to see more of his work, click on this Matteo di Giovanni link.

Walls of Fame:  From the floor, we scale the zebra-striped walls. Constructed of alternating layers of white and black marble the Duomo’s pillars and walls look like prison garb from a silent film character. Instead, they were crafted to honor the city’s mythical founders. Twin brothers, Senius and Aschius were sons of Remus, a co-founder of Rome. When their uncle Romulus, also a co-founder of Rome, killed their father, the boys fled on horseback. One horse was white, and the other was black. These colors were adopted into the city’s coat of arms, and the alternating bands running up the walls create a creepy cool vibe inside the Duomo. 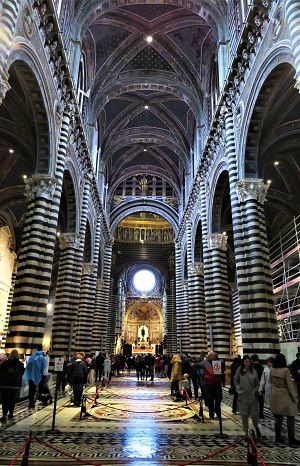 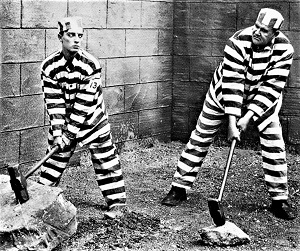 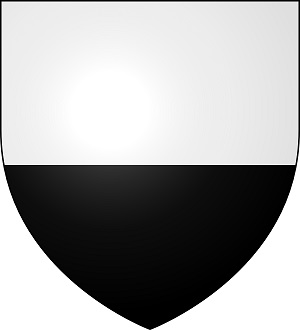 In addition to the monochromatic stripes, the walls are decorated with sculptures and colorful paintings by a who’s who of Italian masters, including Donatello (1386-1466), Michelangelo (1475-1564), and Gian Lorenzo Bernini, (1598-1680) to name a few. 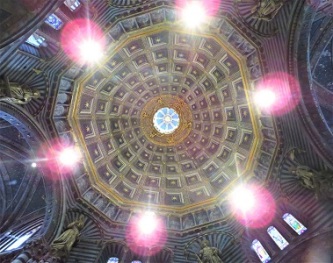 Perched atop the pillars and adjacent arches, are a series of 172 pope heads. Ranging from St. Peter to popes of the 12th century, these marble busts gaze grumpily down at the masses invading their hallowed ground. Above them colorful stained glass windows and a star-studded ceiling and dome crown this majestic cathedral. But wait, there’s more!

Gateway to Heaven:  Our final stop is the roof which we achieve by clambering up a long, winding, claustrophobic’s nightmare of a staircase. A tour through the wooden rafters reveals an up close view of the grumpy popes and gilded ceiling, as well as a bird’s eye view of the floor mosaics. Outside we are rewarded with sweeping views of Siena and the Tuscan countryside.  And yet, there is still more…

A side tour of the Panorama dal Facciatone provides stunning views of the Duomo as well as the unfinished portions of the church. Structural issues and the plague prevented this section from being finished. If this portion had been completed the Duomo di Siena would have surpassed St. Peter’s Basilica. Today, the thrifty Sienese use this unfinished space as a parking lot. 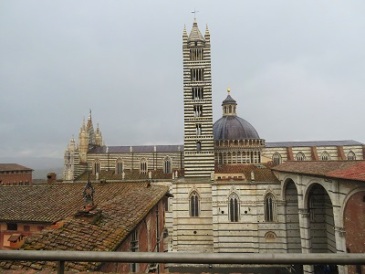 View atop the Unfinished Portion of Duomo di Siena, Photo by cjverb (2019) 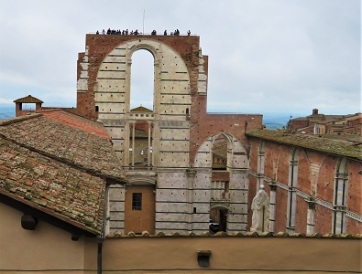 That concludes our brief tour of the Duomo di Siena. If you can swing it, I encourage you to put this magnificent cathedral on your bucket list. In the meantime, take a virtual tour with travel aficionado, Rick Steves, by clicking on this Rick Steves Does Siena link. Next week we’ll continue our Italian adventure with a Vespa ride through Rome. Until then have a fun and festive week!

One thought on “Stairway to Heaven”