Happy Friday! Today on Museum Bites we’re taking a whirlwind tour through Vespa history, courtesy of the Bici & Baci Vespa Museum in Rome. This iconic scooter is quintessentially Italian, full of life and carefree fun. The Vespa made its debut in 1946 and throughout the years it has gone through an amazing transformation while still maintaining its peppy vibe. From retro to racy, the Vespa comes in a variety of flavors and some include accessories such as pedals, a sidecar, modern art, and a very big gun. Hop aboard and we’ll test drive three favorites, but first a little history…

From Duck to Wasp:  After World War II, Italian industrialist, Enrico Piaggio (1905-1965) wanted to build a motorized two-wheeled vehicle that was cheap, light and easy to drive. The current motorcycles were heavy and the drive chain kicked up a lot of dirt and grease on the driver. Furthermore, the tires were hard to change, foot gears were tricky, and the straddle-and-hunch-over-the-handles driving position was awkward and uncomfortable.

Piaggio’s design team first came up with the MP5, a curvy putt-putt type scooter nicknamed Paperino (aka Donald Duck). Piaggio wasn’t impressed and he enlisted the help of Corradino d’Ascanio, an aeronautical engineer. Ascanio’s prototype incorporated features that addressed the difficulties related to the motorcycle. The gear shift was moved up to the handlebars, a mono-stub axle was installed for easy tire changes, and a snazzy shell covered the engine and other greasy motor parts. No more dirty pant legs! Drivers could sit up straight and hopping on and off was a breeze. When the new creation was shown to Piaggio, he exclaimed its narrow body and buzzing engine reminded him of a wasp. And thus, the Vespa (Italian for wasp) was born.

Joy Rider:  Our first wasp is the Vespa 125 constructed in 1951. Most famously featured in the movie, Roman Holiday (1953), the 125’s two-stroke, one-cylinder engine could reach a top speed of 43 mph (70 km/hr). The 125 also included Vespa’s signature front fender headlamp and springy seat. And it was the first model to include a front wheel hydraulic shock absorber, which provided a much smoother ride.

Vespa sales soared after fans enjoyed watching Audrey Hepburn and Gregory Peck zip through the streets of Rome. Click on this Roman Holiday link, courtesy of Movie Clips to witness their madcap ride aboard the Vespa 125.

Fun Vespa Fact #1:  The Vespa Alpha (1967) made its big screen debut in the movie, Dick Smart, Agent 2.007 (1967). Prop engineers modified a Vespa 180 Super Sport to look and act like a scooter-helicopter-submarine combo. Like all spy movie vehicles, this flying wasp was tricked out with a variety of fun gadgets and gizmos. Click on this Vespa Alpha link courtesy of Pianeta Cinema to see Dick Smart and the Vespa 180 Super Sport in action.

Speed Racer:  Our next Vespa is a zoomie little wasp that has a futuristic vibe. The Montlhery Vespa (1950) comes with a souped-up engine, aerodynamic frame, and airplane-like nose. But you won’t find this beauty motoring through the streets of Rome. Instead, it was designed specifically for the Montlhery Circuit in France. In 1950, three drivers took turns completing the 10+ hour race. The Montlhery Vespa’s tiny two-stroke engine reached a top speed of 85 mph (136.92 km/hr) and the Little Vespa That Could, completed 652 miles (1,049) and broke not 1, not 2, but 17 world records.

Vespa racing was popular, particularly in the 1940s and 1950s. Additional racing models include the 1948 Meteor (98 Corsa Circuito) and 1951 Siluro (aka Torpedo), to name a few. In addition to winning trophies and bragging rights, racing models gave Piaggio engineers the opportunity to experiment with Vespa’s design. 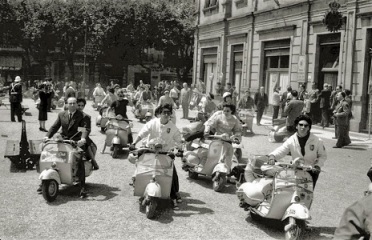 Fun Vespa Fact #2:  Piaggio modified the 1970 Vespa 50 to include pedals for their French market. This addition met France’s transportation rules stating all two-wheeled vehicles must include pedals.

Paratrooper:  The Vespa 150 TAP (Truppe Aero Portate) is the most badass of the Vespa line. Built for the French Foreign Legion and French Parachute Corp, the 150 TAP was designed to be parachuted, along with its driver, into combat territory. Relatively lightweight (115 kg) and fast (top speeds of 60 km/h), the 150 TAP was considered nimble despite its 75 mm cannon. It comes with two jerrycans for extra petrol and six rounds of ammo. Between 1956 and 1959, 600 models of the 150 TAP were made. Their Vespa-on-steroids design, make these wasps a particular favorite among collectors.

Fun Vespa Fact #3: During the summer of 1962, Madrid University students Santiago Guillen and Antonio Veciana embarked on a tour of Europe aboard a Vespa 150. During their travels, they met famed artist, Salvador Dalì (1904-1989), who for whatever reason decided to paint his and his wife’s names on their Vespa. The Vespa Dalì (1962) is on display at the Museo Piaggio.

Whether you’re racing through town or on a track, in need of a canvas or parachuting into a combat zone, the Vespa is your go to ride. Want more Vespa? Click on this entertaining History of the Vespa clip, courtesy of Metis Motors and discover how the Vespa has been tweaked and redesigned over the past 70+ years.

That wraps up our jaunt through Vespa history. Next week we’ll go back to church and take a look at some creepy old bones. In the meantime, have a lovely week.

Italy Magazine: History of the Vespa

The History of the Vespa: An Italian Miracle by Andrea Rapini