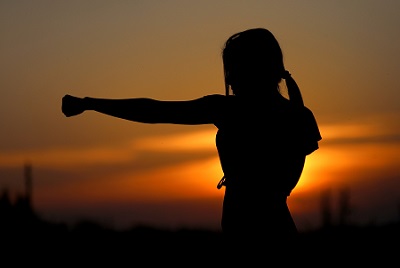 Today on Museum Bites we’re taking a tour through the Minneapolis Institute of Art’s (MIA) fascinating collection of Japanese art. From wabi-sabi to wasabi, samurai to sushi, the Land of the Rising Sun has a rich and mighty history. Join me for a look at ancient bug helmets, delicate fans, weeping statues, and so much more. We begin with a dynamic duo…

Emerging in the 15th century as a reaction to the prevailing aesthetic of lavishness, ornamentation, and rich materials, wabi-sabi is the art of finding beauty in imperfection and profundity in earthiness, of revering authenticity above all.
~ Robin Griggs Lawrence, Wabi-Sabi: The Art Of Imperfection (2001)

Dynamic Duo:  These fierce Vajra Warriors were created in the mid-1300s and built to protect the dharma (Buddhist beliefs). The Misshaku Kongo’s (fist raised) all-the-better-to-eat-you-my-dear expression represents blatant or overt power. In addition to putting the fear of dharma in us, Misshaku’s open mouth growls an ah, the first letter in the Sanskrit alphabet. His counterpart, Naeren Kongo, (waving hand) represents latent or hidden power. Lips clamped shut, Naeren bristles with energy. His closed mouth utters om, the last letter in the Sanskrit alphabet. Together these cosmic sounds of ah and om represent birth and death.

Long ago these lofty warriors stood guard at the entrance to a Buddhist temple. Their menacing glares and cosmic utterances were a reminder to worshipers that life is short and their souls would be doomed to a perpetual ride on the Wheel of Life unless enough good karma was accrued. Only then could they spin and win the bonus prize of nirvana.

Hat Trick:  Our next piece is an outrageous dragonfly helmet called a kawari kabuto. Dating back to the 1600s, this showy headgear was worn by feudal lords and served several purposes. On the battlefield, a kawari kabuto’s height and alarming design were used to identify both friend and foe in the fog of war. Since it often stunned opponents, the kawari kabuto also provided a psychological advantage. Individually designed, these exotic helmets were the hot new Teslas of their time. The style and make were a means of self-expression as well as a status symbol. In the case of the dragonfly helmet, the dragonfly symbolizes agility, attentiveness, and diligence. Valuable virtues on the battlefield. Click on this kawari kabuto link to learn more about these eye-catching helmets.

Fun Dragonfly Fact #1: A fierce and efficient hunter, the dragonfly catches at least 90% of its prey. No doubt its bulbous eyes which provide an almost 360° range of vision aid in the dragonfly’s hunting prowess.

Fun Dragonfly Fact #2: There is much lore surrounding the dragonfly. Dubbed the Devil’s Darning Needle, myths have circulated claiming dragonflies sew up the eyes, ears, and mouths of sleeping children, especially the naughty ones. Night night, don’t let the bed bugs bite!

Refined Resilience: Orchids (1870) is a lovely, painted fan created by Okuhara Seiko (1837-1913), a talented and sought-after artist in the late 1800s. A symbol of resilience and fortitude, the cymbidium orchid is frequently featured in Japanese art. Like her orchids, Seiko persevered in a field dominated at the time by men. Through her talent and hard work, she quickly rose to fame. While in her 30s, at the height of her career, Seiko tutored 300+ students at one time. Trained in Chinese studies and painting, Seiko often includes a self-composed poem with her art. The verse on Orchids translates as follows:

Amid the mountains, orchids aspire to grow as freely as weeds;
Leaves warm themselves and flowers flutter,
Saturated with the spirit of the season.
The orchid sends forth its fragrance;
Never extending too far,
It wafts past the dirt and dust of the everyday world.
~Okuhara Seiko (1837-1913)

Fun Flowery Fact: Cymbidiums are tropical orchids found primarily in Asia and Australia, and range in color from pale white to a deep burgundy.

Frozen Decay:  Our final installment is a haunting piece called Reduction I (2013) by Kondo Takahiro (b. 1958). Seated in a meditation pose, the subject’s eyes are filled with quiet desperation and heartbreak. His pores ooze blue blood or sweat, and the silver droplets sprinkled across his body represent a radioactive mist.

Reduction I by Kondo Takahiro, Minneapolis Institute of Art, Photo by cjverb (2018) 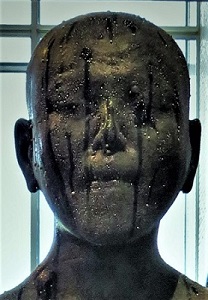 Reduction I (close up) by Kondo Takahiro, Minneapolis Institue of Art, Photo by cjverb (2018)

Created from a cast of his own body, Takahiro created Reduction I (2013) in response to the Fukushima Daiichi Nuclear Plant disaster. In 2011, a 9.1 earthquake and subsequent tsunami resulted in the release of radioactive material into the air, water and soil. The Tohoku earthquake was so strong it rattled the entire planet. Japan’s Honshu island, just 80 miles (130 km) from the epicenter, was propelled 8 feet (2.4. m) eastward. Furthermore, 250 miles (400 km) of the island’s northern coastline dropped by 2 feet (0.6 meters). The earthquake caused icebergs to break off the Sulzberger Ice Shelf in Antarctica, created seismic waves in the fjords of Norway, and produced a low-frequency rumble that was detected by the GOCE satellite orbiting 155 miles (250 km) above the earth. Click on this LiveScience link for more planet-shaking Tohuku earthquake facts. Click on this Kondo Takahiro link to view more of his compelling work.

That concludes our stroll through the MIA’s Japanese exhibition. Next week we’ll continue our tour of the MIA with a dazzling display of functional art. Until then, have a fantastic week!

But wait! There’s more…  Want to learn more about why Japan is called the Land of the Rising Sun? Click on this entertaining clip by Name Explained.