Helen of Troy’s launched a thousand ships and 007’s masked his tricks. Elphaba’s was green and Mr. T’s was often mean. Today on Museum Bites we’re settling in for some face time. Ah the face, we scrub, shave, peel, pluck, wax, and selfie it. Sculptures, paintings, songs, and sonnets have been crafted to celebrate the many wonders of the human face. I’ve come across many faces on my museum travels and following is a collection of some of my favorites. Let’s begin in the ancient Kingdom of Ife…

I’ve just seen a face,
I can’t forget the time or place
Where we just met.
She’s just the girl for me
And I want all the world to see
We’ve met, mm-mm-mm-m’mm-mm
~ The Beatles, excerpt from I’ve Just Seen a Face (1965)

Royal Flush:  This stunning terra cotta sculpture comes from the Yoruba, a tribe belonging to the Kingdom of Ife, located in modern-day Nigeria. This lovely face reveals much about this ancient woman. Her tranquil expression and the fleshy folds on her neck are indicative of wealth and well-being. The distinct grooves marking her face are either a veil worn by female members of the royal family or scarification. This intentional scarring of the body was and is a common practice among many cultures around the world. The look is achieved by making small cuts or scratches in the skin. In addition to facial scars, cuts and designs are also made on other parts of the body, including the torso, buttocks, and limbs. It’s a bloody and painful process and the results, like tattooing, are permanent. Various cultures use scarification as a form of body art, to record victories on the battlefield or as part of maturation rituals (e.g., adolescents transitioning into adulthood). To learn more about this ancient art, click on this National Geographic video clip of a Benin tribe conducting ritual scarification.

Mother’s Day:  This bronzed beauty on display at the Royal Ontario Museum depicts the head of Gauri. Gauri or glowing one is the personification of the kind and compassionate Hindu goddess, Parvati. A symbol of fertility, Gauri is a paragon of wifeliness and motherhood. Each year, she is honored during a three-day festival in late summer or early fall. Hindu women create altars and decorate her statutes with flowers and jewelry. Special meals are made, dances are performed, and Hindu women pray to Gauri for a long, happy, and fertile marriage.

Fun Family Fact: Parvati is the wife of Hindu god, Shiva. She is also the mother of Kumara, the god of war, and Ganesha, the elephant-headed god who is the patron of intellectuals, bankers, and writers.

Facing Inward:  Our next face is a replica of the magnificent moai located on Rapa Nui (aka Easter Island). Carved from compressed volcanic ash, over 900 moai of varying size and shape were created between 1100 and 1600 CE. Only one-third of these massive statues were successfully transported to their intended resting place along the coast. The remaining moai were either left inside the quarry or abandoned during the arduous trek to the sea. Scientists believe these stone sculptures were moved by using a sledge made of palm tree rollers or by “walking” the statues (think: pulling with ropes).

The average moai is approximately 13 feet tall and weighs 14 tons. The largest to be successfully transported is 32 feet tall, 10 feet wide and a whopping 82 tons. All moai face inward (i.e., away from the sea) in what scientists believe is a show of honor to the gods and ancestors indigenous to the island. Click on this Smithsonian Magazine video clip to witness the struggle and strain required to move these majestic moai.

Stealing Beauty:  Our final face is a simply stunning piece carved in pietra serena (Tuscan gray sandstone) by Florentine sculptor, Desiderio da Settignano (c1430-1464). From the curls in her hair to the folds in her dress, the subject’s demure pose and Mona Lisa-esque smile are delicate and detailed.

During the Renaissance, artists were fascinated and downright fanatic about presenting realistic portrayals of the human body. Artists such as Leonardo da Vinci (1452–1519) and Michelangelo (1475–1564) went so far as to dissect animals and cadavers in an effort to better understand the inner workings of the body and perfect their art. It is unclear if Desiderio went to such lengths.  We do know he grew up in a family of stonemasons and belonged to the Arte dei Maestri di Pietra e legnane, a distinguished carver’s guild. Desiderio also co-owned a shop with his brother, Geri. Together the dynamic duo created a wide variety of pieces from simple, everyday wall basins to funeral monuments and elaborate chapel friezes. Geri may have also had a hand in creating our lovely, Young Woman (1460-1480) pictured here. If you’d like to learn more about the art and culture of the Renaissance, click on Museum Bites: Renaissance Man. 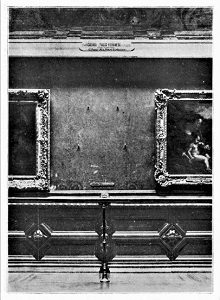 Fun Mona Fact: In 1911, the Mona Lisa was whisked away from the Louvre by thieves. Pandemonium ensued and attendance at the Louvre soared as people clamored to see the blank wall where Mona once hung. The media went wild and accusations of a hoax circulated. At one point Pablo Picasso was accused of stealing the fair lady. Fortunately, Mona was discovered two years later, hiding inside the false bottom of a trunk owned by Vicenzo Peruggia. The Italian immigrant worked for a short time at the Louvre installing special glass fittings that protected the paintings. The police were tipped off by an art dealer when Peruggia tried to sell the masterpiece. He was subsequently tried and jailed. Today, the Mona Lisa is secured behind bulletproof glass and a cadre of security.

Funner Mona Fact: For a short time, the Mona Lisa once graced the walls of Napoleon Bonaparte’s bedroom.

That wraps up our look at a few of my favorite faces. Next week we’ll take a tour through the Minneapolis Institute of Art. Until then, have a fantastic week!

One thought on “About Face”