Today on Museum Bites we’re wrapping up our ramble through the Minneapolis Institute of Art (Mia) with an eclectic mix of favorites. Join me as we peace out with saints, dance with a modern icon, and sample some African jewels. We begin by rolling back the clock to the Middle Ages…

Peace Time:  This dazzling silver Arm Reliquary (c1350-1400) dates back to 14th century France. Encrusted with precious stones, pearls, and rock crystal, its medieval peace sign radiates a cool and contemporary vibe. Christians meticulously crafted reliquaries to carry the bones and in some cases body parts of their saints. They believed a saint’s healing powers could be tapped into even after death. Priests wielded these opulent, bone-filled reliquaries during religious ceremonies in an effort to transmit this mystical power to their faithful. Reliquaries are used by many different religious groups and they have been fashioned into a variety of shapes, sizes, and styles. Christian reliquaries typically resemble the body part(s) originally sheltered inside. Though now empty, this example on display at the Mia most likely contained a saintly arm or hand bone. Click on this Google Arts & Culture link to view a fascinating collection of reliquaries from all over the world.

Africa’s not a color – it’s a place.
~ Trevor Noah 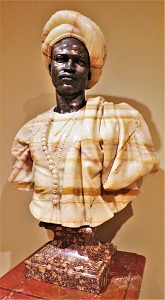 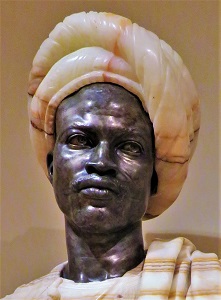 African Beauty:  Our next exhibit comes from the sandy shores of Northern Africa. The Algerian (c1850-1857) by Charles Cordier (1827-1905) is a strikingly life-like sculpture made of Algerian jasper, silvered bronze, and porphyry. From the forlorn look in The Algerian’s eyes to the decorative buttons on his tunic, Cordier has infused this piece with exquisite detail. Note the scarification and wispy whiskers on his face. From 1851-1866, Cordier was contracted by the Natural History Museum in Paris to craft works portraying diverse people from around the world. Cordier traveled to Northern Africa in 1856 and fell in love with the exotic land and its people. While in Algeria, he was introduced to quarries rich in deposits of onyx which he promptly incorporated into his art. Click on this Google Arts & Culture link to view more of Charles Cordier’s captivating work.

Fun Algerian Facts: Algeria is the largest country in Africa and more than 80% of its land consists of the Sahara desert. Brutal northeasterly winds inside the Sahara Desert can reach hurricane levels, whipping up dust devils and violent sandstorms. 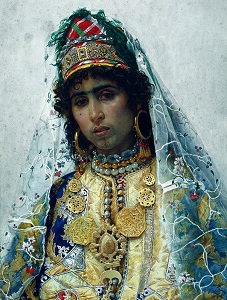 Noble Jewels:  Our next piece also hails from Northern Africa. These magnificent Moroccan ear pendants (tiboukaria) were crafted between 1880 and 1900 by either an Amazigh (aka Berber) or Jewish metal worker. Made of silver and decorated with coral, amber, glass, coins, seeds, and shells the tiboukaria were much too heavy for delicate earlobes. Amazigh women used a chain or string to attach these bulky baubles to their headpiece, veil or hair. Not only an accessory, this bold and exotic jewelry also signified an Amazigh woman’s wealth, status and fertility. Silver, coral, and amber were especially symbolic of Amazigh heritage. Click on this Google Arts & Culture link to view a stunning collection of Amazigh jewelry, textiles, and art.

Fun Amazigh Fact: Amazigh translates to “free born” or “noble”. The Amazigh people live in communities throughout Northern Africa and they are the descendants of the pre-Arab people who lived in this region thousands of years ago.

Nothing is more revealing than movement. The body says what words cannot.
~ Martha Graham

Modern Twist:  Our final work of art is an edgy piece by Venezuelan-American artist, Marisol (1930-2016). Cast in bronze, the Portrait of Martha Graham (1977) is a creepy rendition of the iconic Mother of Modern Dance. Sitting primly, with her gnarled and detached hands resting in her lap. Mother Martha’s face is frozen in wide-eyed horror, bringing to mind Han Solo’s carbonite freeze. A jarring contrast to the signature high kicks and bold contract and release moves of this trend-setting dancer, choreographer, and teacher.

If ever there was anyone who could out Warhol- Andy Warhol,
it [was] Marisol Escobar.
~ David Colman, New York Times

Fun Friendly Fact #1: Like her friend and fellow artist Andy Warhol, Marisol’s art often included prominent figures in popular culture although, with a satirical and in the case of Martha Graham (1894-1991), hair-raising twist.

That concludes our tour of the Minneapolis Institute of Art. Next week, we’ll take a look at the changing face of babies throughout history.

Public Radio International: What it Means to be Amazigh Moroccan