Today on Museum Quick Bites we’re taking a closer look at Ernst Barlach’s, The Avenger (1922), a bronzed beauty that bristles with intensity. Bent at the hip and balancing on one foot with a sword clasped in his hands, The Avenger lunges toward an unseen foe. His flowy robes resemble those of a whirling dervish. If it wasn’t for the sword, The Avenger would appear to be skating or executing a tricky yoga pose. Aside from his pursed lips, his expression appears blank. Is he numb to the task? 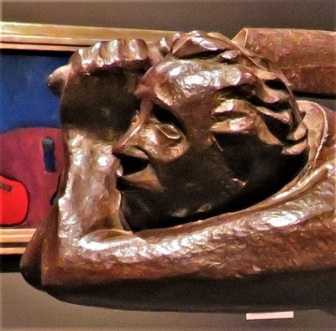 Ernst Barlach (1870-1938) was born in Wedel, Germany, the eldest of four boys. His father, a physician, died unexpectedly when Barlach was only 14 years old. At age 18, he moved to Hamburg and eventually Dresden to study art. A sculptor, playwright, and graphic artist, Barlach’s work is moody, often bleak, but always captivating.  His sculpture has been described as modern Gothic since it resembles the graphic images prevalent during the Gothic era. In addition to sculpture, Barlach created woodcuts and prints to illustrate his plays.

Laden With Someone Else’s Guilt, illustration of The Dead Day (1912) a play by Ernst Barlach, Wikimedia Commons

In the run-up to World War I, Barlach took a nationalistic stance, but his support quickly waned when he witnessed firsthand the horrors of war. Henceforth, Barlach’s art became a means of protest against war. His poignant WWI memorials gained Barlach fame and popularity. However, in the 1930s, the Nazis were outraged by his art and antiwar stance. Barlach and many of his cohorts, including Käthe Kollwitz (recently featured in Museum Bites: Comfort Quick Bite link) were targeted by the Nazis. Barlach’s work was torn down, in some cases destroyed, or put on display and mocked (click on Museum Bites: Bronzed to learn more). In failing health and banned from creating art, Barlach died in October of 1938. 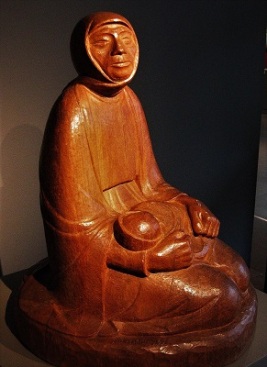 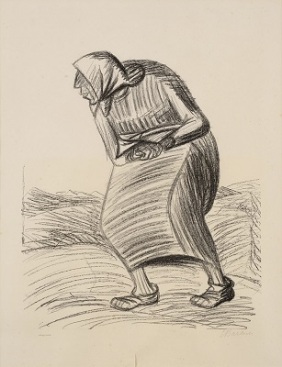 Barlach stated The Avenger represented the “madness of war”. Fortunate for us, much of his work has been recovered and put back on display. The bronze featured here resides at the San Diego Art Museum. You can also find The Avenger in several other museums including the Detroit Institute of Arts, Ernst Barlach Haus, Harvard Art Museums, Minneapolis Institute of Art, and the Tate, to name a few. Click on this Ernst Barlach link, courtesy of Google Arts & Culture to view more of his breathtaking work. 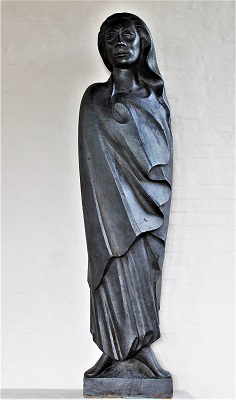 Woman in the Wind (1931) by Ernst Barlach, Photo by Dguendel, Wikimedia Commons

That concludes our look at The Avenger. I’ll be back next week with more Museum Quick Bites. Until then, stay safe and take care 🙂