Happy Friday! Today on Museum Bites we’re continuing our tour through the Grand Rapids Art Museum (GRAM).  Join me for a wild ride on a bucking bronc, a delicious dive into a cool pool, and the opportunity to pay homage to victims of war. We begin in post-World War I Germany…

When Angels Weep:  Our first bronze, Champion of the Spirit (1928) was crafted by Ernst Barlach (1870-1938). Standing atop a four-legged beast, an angel clutches a long, two-handed sword. With the blade resting against his cheek, the angel’s downcast eyes and solemn expression are the embodiment of sorrow for those who died in World War I.

Barlach was not only a sculptor, but a draftsman, graphic artist, playwright, and for a short time, soldier. In 1915, he enlisted as a medic but was quickly transferred into the infantry. After three months of combat, he received a discharge due to a heart condition. Initially idealistic about war, Barlach’s brief experience left him haunted. The horrors of war influenced his art, and his wood and bronze sculptures honoring the victims of the war were displayed in churches and museums throughout Germany.

The Reunion (1926) by Ernst Barlach, Photo by Rufus46, Wikimedia Commons

However, when the Nazis rose to power they were not keen on the tender emotions portrayed in Barlach’s art. They demanded works that glorified Aryanism and propagandized the Nazi party. In 1937, the Nazis organized the Entartete Kunst (aka degenerative art), an exhibition of art they deemed unhealthy and disgusting. The public was invited to tour the collection and ridicule it. Barlach’s The Reunion (1926) was part of this exhibition. His works were taken down, some were destroyed, and he was banned from exhibiting. Distraught and depressed, Barlach died the following year from heart complications. In 1962, his former studio was transformed into a museum. The Ernst Barlach Haus in Hamburg features many of his most famous pieces. A much larger version of Champion of the Spirit is on display outside the University Church in Kiel, Germany. Click on this Ernst Barlach link to view more of his art, courtesy of Google Arts & Culture.

High Dive:  Our next bronze is Joy of the Waters (1920) by Harriet Whitney Frishmuth (1880-1980). Cast in a luxurious stretch, a woman is captured right before she dives into the water. This captivating piece is so lifelike you can almost hear the twang of a high-dive and ensuing splash.

A native of Philadelphia, Frishmuth has had a long and celebrated career—she lived to 100!  She traveled the world and studied with the masters, including Auguste Rodin (1840–1917) and Jean Antoine Injalbert (1845-1933) in Paris, as well as Gutzon Borglum (1867-1941) of Mt. Rushmore fame. Along the way, she received many accolades and awards for her stunning work.

The Vine (1923) by Harriet Frishmuth, Photo by ketrin1407, Wikimedia Commons 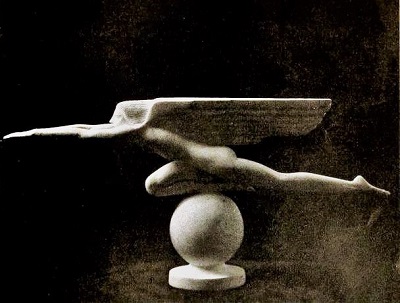 In order to portray her nymph-like figures, Frishmuth hired dancers to serve as models. With music playing in the background, the models pranced and preened, while Frishmuth drew inspiration from their various poses. If you’d like to learn more about Frishmuth and her artistic process, click on this Harriet Whitney Frishmuth video clip courtesy of the Metropolitan Museum of Art.

He [Frederic Remington] is, of course, one of the most typical American artists we have ever had, and he has portrayed a most characteristic and yet vanishing type of American life. The soldier, the cowboy and rancher, the Indian, the horses and the cattle of the plains, will live in his pictures and bronzes, I verily believe, for all time.
~ Theodore Roosevelt (1907)

Panic & Pandemonium:  Our final bronze was crafted by Frederic Remington (1861–1909). The Rattlesnake (c1903) captures the moment a cowboy and his horse spot a rattlesnake poised to strike. Grasping his hat in one hand and the reins in the other, the cowboy struggles to stay in the saddle while his horse bucks in fear. From the cowboy’s taut muscles to the horse’s tucked hooves to the tiny scales on the outraged viper, Remington has skillfully portrayed the panic and pandemonium of the encounter.

The son of a Civil War vet, Remington was initially bound for military school, but his love of art drew him to Yale where he indulged in football and fine art. After only three semesters he abruptly dropped out after the unexpected death of his father. Drawn to the American West, Remington used his inheritance to try his hand at sheep farming in Kansas. It failed. Next, he opened a saloon and when that too failed, he returned east bringing with him sketches of life in the Wild West. Several of these illustrations were featured in Harper’s Weekly and Collier’s and his artistic career took off. In addition to his illustrations, Remington has produced a fine collection of paintings, sculpture, and photography. He also served as a war correspondent during the Spanish-American War (1898). Remington died unexpectedly at the age of 48 from complications associated with an appendectomy. Click on this Frederic Remington link to learn more about his life and work.

Want more bronze? Click on this Museum Bites: Bronzed Beauties link to learn more about this ancient alloy and sample the Detroit Institute of Arts collection of beautiful bronzes. That concludes our tour through the Grand Rapids Art Museum. Next week, I’ll be back with more Museum Bites, until then have a fantastic week!