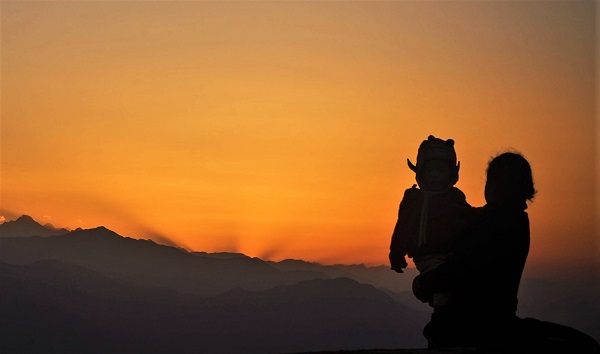 Mother’s Day is on the horizon and today on Museum Quick Bites we’re celebrating moms with a look at George de Forest Brush’s Mother and Child (c1897-1900). With rosy cheeks and wispy curls framing their faces, this adorable pair is timeless. Look closely and you’ll notice the little one nibbling on her lower lip while her mother gazes dreamily at us. Perhaps she’s sleep-deprived like all new parents.

These tender portraits were a common theme for the aptly named American painter, George de Forest Brush (1855-1941). Brush’s talent was evident at a young age. Accepted into the National Academy of Design at the age of 16, Brush commuted from his home in Connecticut to the art school in New York City. Within three years, he won a scholarship to study under Jean-Léon Gérôme (1824-1904) at the prestigious École des Beaux-Arts in Paris.

After graduation, Brush returned to the United States to travel the American West. He settled in Wyoming and spent time with the Arapahoe, Crow, and Shoshone with the intent of capturing on canvas the lives of Native Americans. Many of Brush’s works were featured in Harper’s and Century magazines. After four years, Brush moved back East where he continued to paint scenes of his former life in the West. At the turn of the last century, Brush began painting family portraits, often using his own family as models. If you’d like to view more of his work, click on this George de Forest Brush link, courtesy of Google Arts & Culture.

Fun Arty-Fact: George de Forest Brush’s teacher, Jean-Léon Gérôme created breathtaking paintings, but he was a stickler for the rules on how and what was considered acceptable art. For example, Gérôme had a vehement dislike of Impressionism and went so far as to petition the French government to snub more than 60 Impressionist paintings. Click on Museum Bites: Big Sky link to see Gérôme’s work and learn more about his life. To learn more about the rebellious Impressionists and their battle with Gérôme and the École des Beaux-Arts, click on this Museum Bites: Coloring Outside the Lines link.

Wishing mothers everywhere a fun and relaxing day. I’ll be back next week with more Museum Bites. In the meantime, take care!

Museum Bites: Coloring Outside the Lines