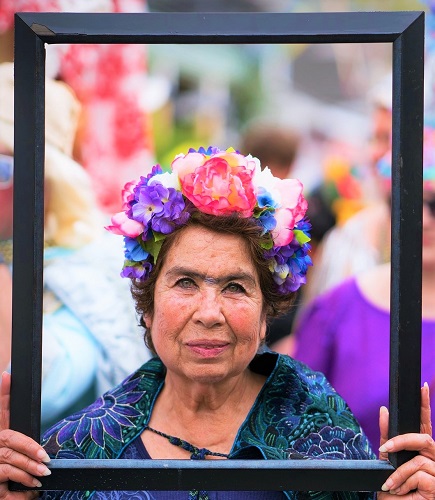 Happy Friday! Today on Museum Bites we’re paying tribute to the selfie, old-world style. Before smartphones and selfie sticks, artists painstakingly crafted self-portraits. These vintage selfies were more than just vanity, they were an inexpensive and handy means of experimentation. Join me for a look at a few favorites on display at the Art Institute of Chicago. We begin with the Other Gertrude…

Self-Portrait of My Sister (1941) by Gertrude Abercrombie, Art Institute of Chicago, Photo by cjverb (2019)

The Other Gertrude:  Self-Portrait of My Sister (1941), by Gertrude Abercrombie (1909–1977) is a tongue-in-cheek title for our first self-portrait. An only child, Abercrombie described her self-portraits as an imaginary sister that conveyed an idealized version of herself. This “sister” is quite stylish with her color-coordinated outfit, elegant black gloves, and jaunty hat. Is that a curly grapevine or corkscrew peeking out of her hat? Known for her surrealist paintings, Abercrombie referred to herself as the Other Gertrude (aka not Gertrude Stein).

It’s always myself that I paint, but not actually because I don’t look that good or cute.
~ Gertrude Abercrombie

Abercrombie’s parents belonged to a touring opera company, and during much of her childhood, she lived and traveled throughout Europe. However, when World War I broke out, her family fled to the Chicago area. In 1925, Abercrombie graduated from the University of Illinois with a degree in Romance Languages. In addition to her paintings, she was famous for her Saturday night parties and Sunday afternoon jazz sessions with local authors, artists, musicians, and Chicago’s elite. Abercrombie held court at these weekly soirees and was given the title, Queen of Chicago. If you’d like to view more of her paintings, click on this Gertrude Abercrombie link.

A Benevolent Rebel:  Frédéric Bazille (1841-1870) crafted this casual, over-the-shoulder self-portrait with the help of a mirror. Destined to be a doctor, Bazille discovered medical school was not his cup of tea. With the support of his wealthy parents, he dropped out to pursue his passion for art. Soon after, Bazille began hanging out with the Anonymous Society of Painters, Sculptors, and Printmakers, etc., crowd (click on Museum Bites: Coloring Outside the Lines link to learn more). Rebelling against the oppressive academic style, many of the members were unable to display, let alone make a living from their art. Bazille often provided financial support and generously shared his apartment and studio with fellow artists. This self-portrait was created during the time Claude Monet (1840-1926) bunked with Bazille.

You are an imbecile to make this commitment [enlist in the military] because you have neither the right nor the duty! Merde! Merde! Merde!
~Pierre-Auguste Renoir (1841-1919)

Like Abercrombie, Bazille’s life was also greatly affected by war. Soon after the Franco-Prussian War (1870-1871) broke out a passionate and patriotic Bazille enlisted, to the stunned dismay of his family and friends. Within a few short months, he died on the battlefield after assuming command from his wounded superior officer. During his brief life, Bazille created 70+ paintings, including four self-portraits. Click on this Frédéric Bazille link to see more of his work.

A Life in Contrast:  Our final selfie is a stunning self-portrait (1887) by Vincent van Gogh (1853-1890). Created in 1887, Vincent’s distinctive brushwork and contrasting colors (blue-green vs red-orange) make this painting buzz with energy. His somber blue-green eyes also give us a glimpse into his lifelong despair. Throughout his adult life, Vincent struggled with depression and mental illness. He found solace in his art and received both emotional and financial support from his younger brother, Theo. This painting was created when the two lived together in Paris.

…I prefer painting people’s eyes to cathedrals, for there is something in the eyes that is not in the cathedral, however solemn and imposing the latter may be – a human soul, be it that of a poor beggar or of a streetwalker, is more interesting to me.
~Vincent van Gogh (letter to Theo van Gogh, 1885)

After a violent confrontation with fellow artist, Paul Gaugin (1848-1903) and an extended stay in a psychiatric hospital, Vincent tragically ended his life in 1890. If you like to learn more about his life, click on Museum Bites: Vincent. If you’d like to view more of his work, click on this Van Gogh Museum link.

That concludes our look at the Art Institute of Chicago’s selfies. I’ll be back next week with more Museum Bites. In the meantime, have a fantastic week!