Today on Museum Bites we’re taking the plunge, a polar plunge into Lake Michigan. Traversed by freighters, ferries, and fishers, its shores are dotted with lighthouses, sandy dunes, quaint beach towns, and bustling industry. Join me for a tour through the Grand Rapids Public Museum’s Lake Michigan exhibit to learn more about this mighty lake’s impact on weather and waves. We begin by dialing back the clock to the Ice Age…

Great Lengths:  The Great Lakes were formed approximately 14,000 years ago during the Pleistocene Epoch (aka Ice Age). As the Ice Age waned, a ½ mile-thick glacier once covering the northern Midwest, gradually receded into Canada, leaving behind five massive basins that eventually became our Great Lakes (Superior, Huron, Michigan, Erie, and Ontario).

Lake Michigan gets its name from the Native American Ojibwa word mishigami, meaning big lake. Like its name implies, Lake Michigan is truly a big lake, measuring 118 miles wide by 307 miles long by 923 feet deep (max. depth). Within its shores, the lake holds 6 quadrillion (6 followed by 15 zeros or 6,000,000,000,000,000) gallons of fresh water. Lake Michigan is the only Great Lake residing solely within the United States. However, according to the University of Wisconsin, Lake Michigan and Lake Huron are technically one lake since they are connected by the Straits of Mackinac. 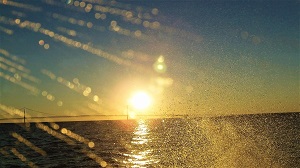 Riding the Ferry Over the Mackinac Straits, Photo by cjverb (2013)

Fun Lake Fact: The Great Lakes contain 20% of the world’s fresh water, an amount so vast it could submerge the entire continental United States under 9.5 feet of water.

Catch a Wave:  Despite polar vortexes and chilly Midwestern winters, the Great Lakes rarely freeze over and instead of tides, seiches roll across the water. These slow moving waves are caused by wind and abrupt changes in atmospheric pressure. Wind pushes water in one direction across the lake and when it eventually subsides, the water flows back in the other direction. The waves slosh back-and-forth across the many miles of the lake until the water reaches equilibrium (i.e., calm lake) or the wind changes course and the process begins in another direction. The time between the high and low points of a seiche can range from 4 to 7 hours, similar to the timespan between ocean tides. This is why seiches are often mistaken for tides. To learn more, click on this short clip, What is a Seiche?, courtesy of the Sandusky Register and Ohio Department of Natural Resources.

Frightening Lake Fact: Seiches gone bad! In 1844, a 22-foot seiche roared onto Lake Erie’s shore, breaching a seawall and killing 78 people. This violent seiche was so powerful it created an ice dam that caused Niagara Falls to temporarily run dry.

Lake Effect:  Lake Michigan, along with its Great Lake siblings also has an impact on the local weather. In the winter, cold air blows across the warmer water in the lake. It picks up moisture, forms clouds over the lake, and then dumps heavy amounts of snow (aka lake-effect snow) on shore. This phenomenon is also why winter around the Great Lakes is often overcast and gray. 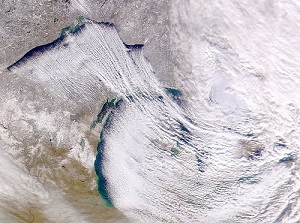 In the spring and summer, a warm weather lake effect occurs when warm air blows across the cooler water in the lake. It too picks up moisture but does not form clouds until it collides with the warmer air on shore. In other words, the sky over the lake remains clear while on shore it is cloudy. Much to the dismay of beachgoers.

Invasion:  Today local, state and federal agencies are working hard to preserve the natural beauty of Lake Michigan and its fellow Great Lakes. Pollution, failing infrastructure, and over 180 invasive species of plants and animals threaten the health and welfare of our lakes. Click on this Alliance for the Great Lakes link to learn how you can get involved.

That wraps up our look at the Mighty Michigami. If you haven’t had the chance to visit, I highly recommend you put it on your bucket list. Next week, we’ll continue our ramble through the Grand Rapids Public Museum with a post-Valentine’s celebration of candy. Until then have a safe and happy week!

Alliance for the Great Lakes