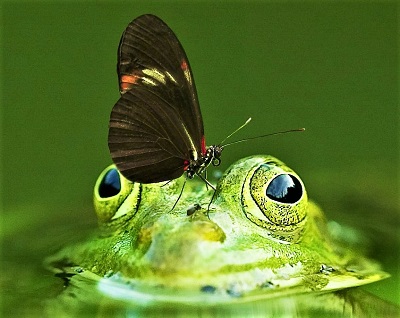 Today on Museum Bites we’re floating on air. The trees are budding, the birds are nesting, and soon butterflies will be fluttering about. These colorful creatures symbolize daintiness and whimsy, but don’t be fooled. Butterflies are no shrinking violets. They fend off predators with style, transform from creepy crawly to winged badass, and each year migrate thousands of miles. Join me for a brief look at the wild and wonderful world of butterflies.

The Very Hungry Caterpillar:  The life of a butterfly is a strange and wondrous thing. Highlights include binging, morphing, mating, and in some cases migrating. Life begins on the leaf or tree where adult females lay their tiny eggs. Larvae quickly develop and when complete, the resulting caterpillar chews itself free. The hungry beast continues to feast on the egg “shell” and then turns to leaves, grass and other vegetation for its next set of meals. During this larval phase, the caterpillar’s sole purpose is to fatten up in preparation for metamorphosis. This feeding frenzy and increased girth cause the caterpillar to shed its skin at least four or five times.  Once sufficiently plump the caterpillar attaches itself to a branch or leaf and begins to generate a chrysalis. Inside this protective shell, the caterpillar gradually morphs into a butterfly. Like angsty tweens weathering the highs and lows of puberty, caterpillars rely on specific hormones to bring about metamorphosis.

The adult butterfly eventually breaks free of its chrysalis and immediately pumps fluid into its wings. Once the wings expand and harden the adult butterfly grabs a quick meal and then sets about finding a mate to repeat the process for future generations. A butterfly’s entire life cycle can take anywhere from few weeks to a few years depending on the species. Click on this time-lapse video by National Geographic to see this amazing process in action.

The Very Hungry Flap: Eric Carle, author of the popular children’s book, The Very Hungry Caterpillar caught a lot of flak when he portrayed a butterfly emerging from a cocoon. Moths form cocoons and almost all butterflies create chrysalises. Carle explains that his butterfly is unique and patterned after the Parnassian, one of the rare cocoon-making butterflies. Click on Eric Carle’s Very Hungry explanation to learn more.

Winging It:  Butterflies and moths are classified as Lepidoptera, meaning scaly winged insect. A series of tiny, overlapping scales, similar to roof shingles make up their wings. Each scale is one distinct color and like a mosaic, they create elaborate and in the case of butterflies, more vibrant patterns. These scales provide insulation, and also play a role in mating and defense.

Compared to moths, butterflies are characterized by their trimmer bodies, club-like antennae and day-time activity. They also do not suffer from flame-obsession like their crazy kamikaze cousins. Moths, however, are more prevalent and outnumber butterfly species 14:1.

Fun Hybrid Fact: Skippers are a type of Lepidoptera that share both butterfly and moth characteristics.  Skippers have the plumper physique of a moth and butterfly-like antennae. They are also out and about during the day like butterflies.

Butterfly Badassery:  Butterflies are not only pretty, they are wily and fierce. In addition to having the ability to morph from caterpillar to winged creature, the butterfly can trace its roots back 200 million years to the Jurassic Period. They have survived not one but two major extinctions and over the centuries, have developed some clever defense mechanisms. Butterflies use different types of camouflage to fend off predators. Their chrysalis in particular often blends in with its surrounding environment.

The colors orange and red are the Mr. Yuk of the animal kingdom and the Monarch butterfly’s brilliant orange wings warn foes they will pay dearly if they decide to take a nibble. Not to be outdone, the nonpoisonous Viceroy butterfly mimics the color and markings of a monarch in a sneaky effort to ward off the bad guys. Furthermore, the aptly named Owl butterfly has spots on its wings that mimic the eyes of an owl and succeed in scaring off would-be predators.

In addition to camouflage, the tiny scales on a butterfly’s wings detach when predators try to latch on, allowing the butterfly to make a hasty escape. Some species also play possum, dropping to the ground and playing dead when under attack. This technique works especially well if the butterfly blends into the ground covering. Click on this Museum Bites: Hiding in Plain Sight post if you’d like to learn more about camouflage.

Migration is another example of butterfly badassery.  Monarchs and Painted Ladies migrate thousands of miles each year. Scientists have attached tiny transmitters to these fierce fliers and discovered they use wind currents to adjust and streamline their course. Butterflies have been clocked at speeds of up to 62 mph.

Our final bit of butterfly badassery concerns diet. Butterflies typically feast on nectar, fruit juice, and tree sap. There are, however, several species that also dine on feces and raw flesh.

Fun Sizable Fact:  The largest butterfly in the world is the Queen Alexandra’s Birdwing, measuring in with an 11+ inch (30 cm) wingspan. One of the tiniest butterflies is the Blue Pygmy with a wingspan of 0.5 to 0.75 inches.

Today more than 17,000 species of butterflies populate our rainforests, deserts, mountains, and plains. If you’d like to dig deeper, click on this National Geographic Blue Morpho Butterfly clip. Next week, we’ll take a ramble down the Appian Way and tour ancient Rome. In the meantime, have a fantastic week!

National Geographic: Why Do Butterflies Have Such Vibrant Colors and Patterns?