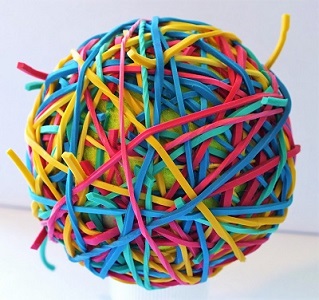 Spring is in the air and today on Museum Bites we’re gearing up to play ball…the old-fashioned way. In ancient Mesoamerica, pre-Colombian societies like the Olmecs, Mayans, and Aztecs were swept up in ballgame fever. A cross between soccer and basketball, with the occasional human sacrifice thrown in, this fierce and fast-paced game has been captivating fans for more than 3,000 years. Join me for a brief look at this age-old blood sport.

Full-Court Press:  Referred to as pok-ta-pok by the Mayans and ollama by the Aztecs, the ballgame originated with the Olmecs, one of our first pre-Colombian societies. The game’s daring, high-octane play thrilled spectators, and soon it spread throughout Mesoamerica. More than 1,500 ball courts have been excavated in Mexico and Central America. The oldest dates back to c1400 BCE and was discovered in Paso de la Amada, Guatemala.

These ancient fields of play included a narrow, rectangular pitch, typically 200 feet (60 m) long and flanked by either sloping or steep rebound walls. Some walls sport stone rings or hoops while others do not. The rules of the ballgame are sketchy and varied depending on where and when it was played. The object of the game was to score the most points. Two opposing teams squared off and in a series of volleys, chalked up points by maneuvering a ball across an end zone or through a stone hoop. The catch? Competitors could not use their hands and possibly feet. Descriptions include players using elbows, shoulders, torso, hips, knees, and thighs to keep the ball in play.

Sudden Death:  Game balls ranged in size from 4 to 12 inches (10 to 30 cm) in diameter, weighed from 1 to 8 lbs. (500g to 3.5 kg) and were made of solid rubber. These bouncing missiles were not like the “soft” inflatable rubber ball you got beamed with in 6th grade dodgeball. They were instead, more like wildly ricocheting cannonballs. Historical accounts describe players suffering bruises, hemorrhaging, concussions, and broken bones.

The ball on the rebound hit them in the mouth or the stomach or the intestines, so that they fell to the floor instantly. Some died of that blow on the spot because they had been too eager to touch the ball before anyone else.  ~ Friar Diego Duran, Dominican Missionary

And if the horrors on the field didn’t provide the requisite jolt of adrenaline, the post-game decapitations surely did. The Mayans used the ballgame as a form of warfare, forcing their captives into play and chopping off their heads when they lost. The bloodthirsty Aztecs, known for their mass human sacrifices, were no doubt keen to find a healthy supply of post-game losers ready for the slaughter.

Gearing Up: Teams were strictly male and ranged in size from 2 to 7 players. Protective gear included leather padding for the hips, elbows, and knees. Some later teams added hand mitts and helmets.

Games were festive events where citizens young and old, rich and poor gathered to place bets, party, and cheer on their team. On game day, wealthy sponsors and avid fans strutted around in their ceremonial equipment. This fancy gear was made of elaborately carved stone and included a yoke, palma, and hacha. The U-shaped yoke wrapped around on the hips. The palma attached to the yoke and typically portrayed gruesome carvings of human sacrifice. And the final piece of ghoulish gear is the hacha, a stone human head that also attached to the yoke and may have been used as a ball marker. Many Mesoamerican men have packed their tombs with these beloved hand-carved pieces. 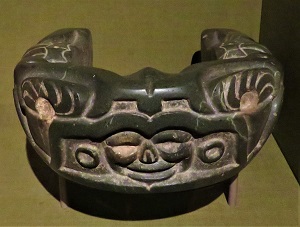 Ceremonial Yoke, Detroit Institute of the Arts, Photo by cjverb (2018)

Palma, Detroit Institute of the Arts, Photo by cjverb (2018)

Hacha, Detroit Institute of the Arts, Photo by cjverb (2018)

Fun Bouncy Fact: When the Spanish first encountered the ballgame they were mesmerized by the bouncing ball. Some even believed the demonic orb was possessed. European game balls at the time were made of leather and stuffed with feathers and hair. In other words, they had no bounce

Fun Rubbery Fact:  Roughly translated, Olmec means “rubber people” in the Aztec language. The Olmecs were known for harvesting latex from Panama rubber trees and blending it with the juice of the moonflower vine to make rubber.

Fun Airy Fact: Tires are not made of solid rubber because they would be much heavier than their airy counterparts. Solid and heavy means more energy is needed to turn the wheels (think: bad gas mileage) and lack of air means less cushion for those bumpy, pothole-laden roads.

That concludes our discussion of the Mesoamerican ballgame. Next week we’ll be getting our Spring on with a look at the magical world of butterflies. Have a great week!