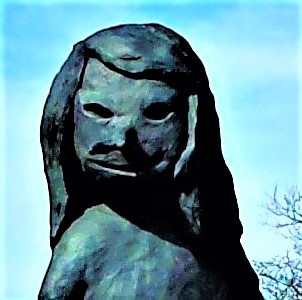 Today on Museum Bites we’re taking a journey to a magical place where superheroes clash, tree creatures strut, muppets teach us about trash, and just in time for St. Patrick’s Day, our Irish eyes take a peek into the future.

Designed by architect, Zaha Hadid (1950-2016), the Eli and Edythe Broad Art Museum in East Lansing, Michigan resembles a futuristic Noah’s ark or if you’re like my Star Wars nerd husband, a Jawa Sandcrawler.  One thing is clear, the building is zoomy.

Outside, the sculpture garden is filled with an eclectic assortment of art.  Klara Kristalova’s whimsical stick-figure, Deer (2012) features a young girl with long tree-branch limbs and a twig-like nose.

It is unclear from her expression if she is friend or foe. Stare into her hollowed out eyes and you decide (muahahaha).  By contrast, the Sloth Pietà (2012) by sculptor, Steve Miller conjures up warm, fuzzy feelings.  This touching x-ray of a mama sloth snuggling her baby is a play on Michelangelo Buonarroti’s famous Pietà located in St. Peter’s Basilica.  Take a look at the entire collection by clicking on this Broad Sculpture Garden link.

Moving inside, the Broad currently has on exhibition, 2116: Forecast of the Next Century.  A select group of Irish artists gives us their vision of Ireland 100 years into the future with a look at architecture, agriculture, and the environment.  In the Minskoff Gallery, digitally enhanced photographs by Darn Thorn (1975- ) depict futuristic buildings plopped into the heart of the rugged Irish countryside.  These edgy structures situated against the backdrop of a rural landscape remind me of scenes from some of my favorite 1970s post-apocalyptic sci-fi movies like Logan’s Run (1976) and Planet Earth (1974).

Artist Sam Keogh (1985- ) has created a rather creepy version of Sesame Street’s Oscar the Grouch.  Like WALL•E, this futuristic muppet makes a statement about our consumerist society and the impact our growing heaps of trash will have on future generations.  In the Demmer Gallery, Ailbhe Ní Bhriain’s (1978- ) multi –screen exhibit features eerie clips of various locations around Dublin’s Natural History Museum.  Each film runs on a ~10-minute loop, and with the help of CGI, watery floors and a white mist, morph in and out of the clips.  Each film also features a bird patiently perched on display cases and bookshelves, as if to watch time drift, as opposed to fly, by. Irish poet and playwright, William Butler Yeats (1865-1939), creates a strikingly similar tone in the following poem:

If you’re in the neighborhood, stop by the Broad and get a pre-St. Patrick’s Day jump on all things Irish.

Next week I’ll be spooning up some snap, crackle, and pop, with a look at the history of breakfast cereal. Have a great week!