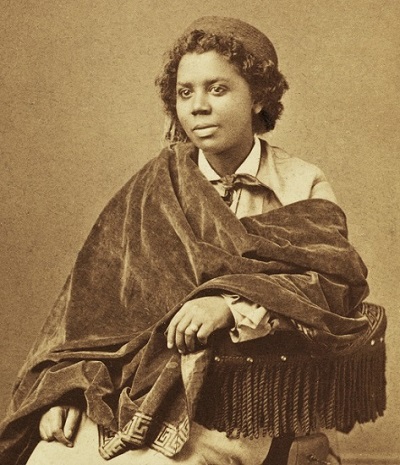 Today on Museum Quick Bites we’re kicking off February and Black History Month with a masterpiece. The Death of Cleopatra (1876) by Edmonia Lewis is a haunting portrayal of the Egyptian queen just moments after her suicide. Draped elegantly on her throne, Cleopatra (c69-30 BCE), at first glance, appears to be napping. But take a closer look at the details Lewis has incorporated into this magnificent piece.

Note the poisonous snake clutched in Cleopatra’s right hand (see below) and how the left dangles lifelessly alongside her throne. These are strong clues indicating this is no catnap. Cleopatra’s nemes, a striped headdress worn by pharaohs, signifies her royal status. And the twin sphinxes carved into the throne represent her twin sons, fathered by Mark Antony (83-30 BCE).

Closeups of The Death of Cleopatra (1876) by Edmonia Lewis, Smithsonian American Art Museum

Lewis’ superior skill is evident in how Cleopatra’s gauzy gown appears to drape and flow. Regal and fair, Lewis also included many jewels on the dead queen, from her necklaces, to her arm cuff, to her bracelet and ring. The curly-cue sandals are a stylish touch.

Overall, The Death of Cleopatra is a majestic and unique portrayal of the fallen queen. A common subject during the Neoclassical era, mainstream artists typically portrayed a more romanticized version of Cleopatra. One where she is alive and contemplating her death by snake. For the time, Lewis’ portrayal was considered gritty, intriguing, and for a small few, shocking.

The Death of Cleopatra (side view; 1876) by Edmonia Lewis, Smithsonian American Art Museum

Mary Edmonia Wildfire Lewis (1844-1907) was born in Greenbush, New York. Originally named Wildfire by her Ojibwa mother and African American father, Lewis and her older brother Sunrise, were orphaned at a young age. The siblings were initially taken in and raised by their mother’s family. Sunrise eventually moved out West to prospect gold. When Wildfire turned 12, she settled in Albany and with the financial support of her brother, enrolled in boarding school. At 15, she began taking classes at Oberlin College in Ohio and changed her name to Mary Edmonia Lewis.

In 1863, two of Lewis’ roommates accused her of poisoning them. Prior to her trial, Lewis was captured, taken to a remote field, and viciously beaten by white vigilantes. Her trial had to be delayed so she could recover from her injuries, but once underway, Lewis was acquitted of all charges. However, the atmosphere at Oberlin remained hostile and Lewis was forced to leave prior to her graduation.

She relocated to Boston and apprenticed with sculptor, Edward Brackett (1818-1908), where her artistic skill and reputation grew. Using money from the sale of her portrait busts and medallions, Lewis embarked on a Grand Tour of Europe in 1865. She eventually settled in Rome. Warmly accepted by British and American expats, Lewis set up shop and once again her reputation flourished. From poets to presidents, many notable Americans added Lewis’ workshop to their Grand Tour itineraries. Such notables included Henry Wadsworth Longfellow (1807-1882) and Ulysses S. Grant (1822-1855).

Fun Arty Fact #1:  Edmonia Lewis created a series of sculptures based on characters from Henry Wadsworth Longfellow’s poems, including Minnehaha and Hiawatha. In 1869, the American poet visited Lewis’ studio to sit for his portrait. He no doubt got a peek at Lewis’ lovely portrayals these figures.

Lewis returned to the United States on several occasions, accompanying her art when it was on exhibition. In 1876, The Death of Cleopatra was featured at the US Centennial Exposition in Philadelphia. Considered her masterpiece, this magnificent work received rave reviews. Subsequently, the 3,000 lbs. sculpture bounced around the Midwest, landing in a pub, a racetrack, and eventually a junkyard. Click on this Death of Cleopatra link to learn how a troop of boy scouts saved this royal beauty.

Fun Arty Fact #2:  In 2017, Google featured a doodle of Edmonia Lewis and The Death of Cleopatra. Click on this Wildfire Google Doodle link for a look-see.

For reasons unknown, Lewis packed up and moved to London in 1901. She died of Bright’s disease (aka nephritis), a type of kidney disease, six years later at the age of 63. If you’d like to view more of her work, click on this Edmonia Lewis link, courtesy of the Smithsonian American Art Museum.

That concludes our look at Mary Edmonia Wildfire Lewis and The Death of Cleopatra. If you’d like to learn more about the origins of Black History Month, click on this Association for the Study of African American Life and History link. I’ll be back next week with more Museum Quick Bites. Until then, be safe, be kind, and take care 🙂

Association for the Study of African American Life and History