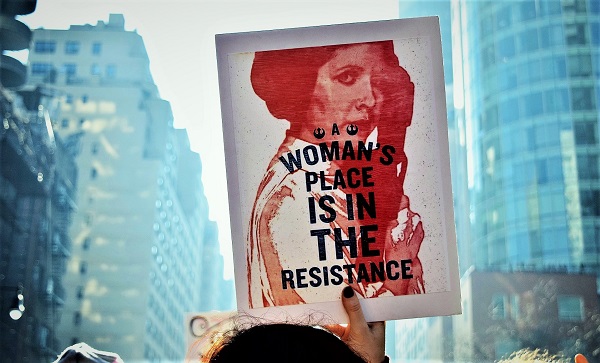 Today on Museum Bites we’re continuing our tour through the Art Institute of Chicago with a look at some badass women. This colorful cast includes a champion of women’s health, a defiant ruler, and a steadfast and devoted queen. Rebellious, revolutionary and revered, each took on the system in her own way. For a brief introduction, let’s begin by turning back the clock to ancient Rome…

Rebellious:  Our first rebel is Queen Septima Zenobia (died c274 CE) of Palmyra (modern-day Syria). Zenobia took control of Palmyra after her husband, the king, and eldest stepson were assassinated. One of her first actions was to declare Palmyra’s independence from the Roman Empire. Next, Zenobia ordered her army to wage war with their neighbors. During her short reign, Zenobia conquered Egypt and a fair portion of Asia Minor.

In 272 CE, Roman Emperor Aurelian’s forces defeated the rebels and took back control of Palmyra. Zenobia and her young son, Vaballathus were captured while trying to escape. There are conflicting reports on Zenobia’s fate, some historians claim she was part of Aurelian’s victory parade in Rome while others believe she starved herself to death on the road back to Rome.

I have tried to make her [Queen Zenobia] too proud to exhibit passion or emotion of any kind; not subdued, though a prisoner; but calm, grand, and strong within herself.
~ Harriet Goodhue Hosmer

Harriet Goodhue Hosmer (1830-1908) created this stoic marble bust of Queen Zenobia. A popular and prolific artist, Hosmer was a badass in her own right. She was responsible for pioneering the process of transforming limestone into marble. A professional artist, she was also able to financially support herself on sales of her art. A rare occurrence for any artist, especially a woman in the late 1800s. Click on this Harriet Goodhue Hosmer link to view more of her work.

Revolutionary:  Our next rebel was a champion of women and children’s health. In 1859, Mary Harris Thompson (1829-1895), left her teaching career to pursue medicine at the ripe old age of 30. Within four years she received her medical degree from the New England Female Medical College in Boston and was the first woman to perform major surgery. Later that year, Thompson moved to Chicago. Her new city boasted two hospitals, but they sorely lacked the knowledge and proper care of female patients. One facility went so far as to ban women and girls from any care. 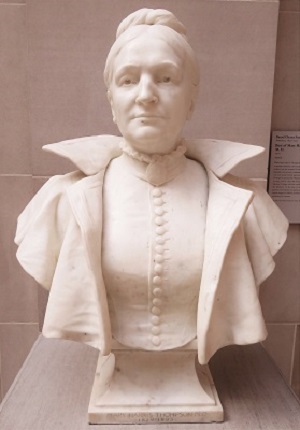 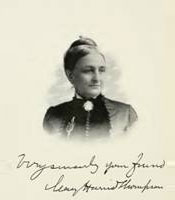 Enter Mary Harris Thompson. Despite her degree and success in medical school, she tried and failed to obtain a position at these lackluster hospitals because she lacked a Y chromosome. Instead of leaving to find employment elsewhere, Thompson rolled up her sleeves and began collecting donations from wealthy Chicagoans. In 1865, (just 2 years later), she established the Chicago Hospital for Women and Children, a charity hospital that initially cared for the widows, wives, and children of Civil War veterans. And if that weren’t enough, in 1870 this badass babe founded the Women’s Hospital Medical College in an effort to train female doctors and promote women’s health. After her death in 1895, the facility was renamed the Mary Harris Thompson Hospital for Women and Children and it remained open up until 1988.

This marble bust of Mary Harris Thompson, MD was created by Daniel Chester French (1850-1931). He is best known for his patriotic statutes, including the massive monument of a seated Abraham Lincoln located inside the Lincoln Memorial. Click on this Daniel Chester French link to view more of his work.

Revered:  Our final rebel hails from old world Prussia. In 1793, Luise of Mecklenburg-Strelitz (1776-1810) married Frederick William III, a weak and ineffectual King of Prussia. Within a few years of their marriage, Napoleon Bonaparte began rattling his saber. Devoted to her country and fearing an invasion, Luise became one of Napoleon’s biggest critics. She rallied her people and spoke out against Le Petit Caporal, stating, “…let us fight the monster, let us beat the monster down.” 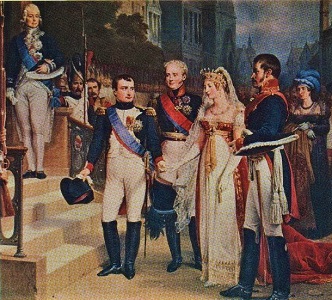 Unfortunately, in October of 1806, Napoleon’s forces crushed the antiquated Royal Prussian Army. The Battle of Jena-Auerstädt was over in three bloody weeks. A pregnant Luise joined her husband at the signing of the Treaty of Tilsit (1807). There she met for the first time, Napoleon, who was impressed with her devotion and grace. Despite Prussia’s humiliating loss, Queen Luise became a symbol of resistance to the Prussian people.

Johann Gottfried Schadow (1764-1850) created this bronze bust of Queen Luise. He is best known for the Quadriga of Victory (1793) a bronze sculpture of four horses pulling a chariot, located atop the Brandenburg Gate in Berlin. If you’d like to view more of his work, click on this Johann Gottfired Schadow link.

That wraps up our look at some of the badass women featured at the Art Institute of Chicago. I’ll be back next week with more Museum Bites. Until then, be safe, be kind, and take care 🙂