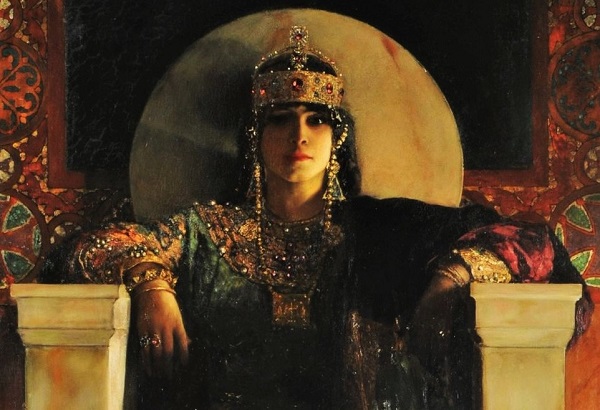 Today on Museum Quick Bites we’re stepping into the Basilica di San Vitale in Ravenna, Italy to learn more about Byzantine Empress Theodora (c497-548). Inside these 6th century walls, her portrait, crafted from colorful glass and gold-infused tiles, offers clues about this powerful, multi-faceted woman. From devout Christian to demonic consort, Theodora’s portrayal in art, literature, and even the stage is much like her empire, complex.

Theodora was born into a working class family around the year 497. At a young age, she began performing on stage at the hippodrome in Constantinople, where her father worked as a bear keeper. There are also reports Theodora worked as a prostitute. Around the age of 16, Theodora traveled to Alexandria, Egypt and at some point during her journey, she converted to Monophysitism.

In 522, Theodora began a relationship with Justinian I (483-565), a powerful senator and nephew of Byzantine Emperor Justin I (c450-527). Byzantine law prevented the couple from marrying because Theodora was once an actress and thus, from a lower class. When Justinian assumed the role of co-emperor in 525, he promptly had the law changed and the pair wed soon after.

Fun Byzantine Fact #1: The Secret History: Anecdota by Procopius of Caesara is a salacious, unauthorized biography of power couple, Justinian I and Theodora. The bio appears to be light on facts and heavy on gossip. In one section, Procopius claims Justinian periodically morphed into a demon and Theodora’s goal was to marry the “Lord of Demons” (aka Justinian) because he would make her the “mistress of money without limit”.

After the death of his uncle in 527, Justinian I became the sole emperor and in a joint ceremony, Theodora was coronated empress alongside her husband. Theodora wielded much power and influence in Justinian’s administration. She was the driving force in getting legislation passed to advance women’s rights such as banning sex trafficking and forced prostitution of young girls, obtaining divorce rights for women, and prohibiting the persecution of Monophysites.

Fun Byzantine Fact #2:  The term byzantine means a devious and scheming style of management. Think clandestine meetings in parking garages. The term was often used to refer to the former Soviet Union because of the secretive manner in which they ran their government.

In 532, Theodora played a crucial role during the Nika Revolt. A rebellion broke out during a chariot race at the Hippodrome. With fists raised and shouting Nika! (win or conquer in Greek), members of the Blue and Green parties united, lit fire to the city, and demanded an end to Justinian I’s rule. The emperor’s advisors urged him to flee Constantinople, but Theodora convinced him to stay, claiming it was better to stake his claim and die an emperor than runaway. Justinian took his wife’s advice and had his generals round up and slaughter the rebels inside the hippodrome. Many of the city’s buildings and churches were burned during the uprising and Justinian and Theodora took it upon themselves to rebuild on a much grander scale. One notable example is the Hagia Sophia.

In 548, Theodora succumbed to cancer. Justinian fell into a deep depression and his administration became listless for the remainder of his rule. This further emphasized the impact Theodora had on the Byzantine Empire.

Theodora’s portrait in the Basilica di San Vitale is our best portrayal of this enigmatic woman. Artisans placed the glass tiles at slightly different angles in order to enhance the glittery effects, especially in candlelight. Flanked by her courtiers, Theodora’s portrait faces Justinian I’s in the apse, the most sacred area of the church. Her gold halo, Tyrian purple robes (a color only worn by Roman royalty and a nod to the Byzantine Empire’s Roman roots) and location in the church, signify her political as well as religious importance in the Byzantine Empire. However, notice the background in Theodora’s mosaic portrait is different from Justinian’s? This is because at this point in history, Christian men and women worshipped in separate areas of the church.

Construction began on the Basilica di San Vitale circa 526 and it was consecrated in 547, the year before Theodora’s death. There is no evidence the couple visited the church, but these gorgeous mosaics are proof their influence was keenly felt on this western edge of the Byzantine Empire.

That wraps up our look at Empress Theodora. I’ll be back next week with more Museum Quick Bites. Until then, be safe, be kind and take care 🙂

Metropolitan Museum of Art: Dress Styles in the Mosaics of San Vitale (2012)

The Secret History: Anecdota by Procopius