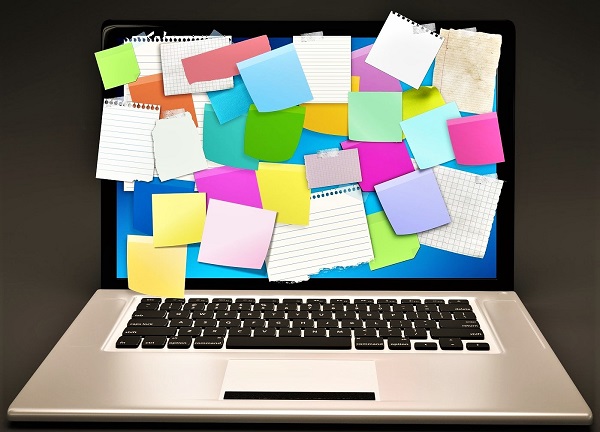 Pinned to a wooden board, three strips of red leather support a mishmash of writing implements. Notice the curiously long scissors, feathered quill, smudged penknife, scarlet sealing wax, dog-eared booklets and letters, as well as a pair of pince-nez. Despite the bland subject matter, van Hoogstraten’s meticulous attention to detail and skill at portraying perspective is so realistic the objects on this 17th century bulletin board appear to leap (fall?!) off the painting. Van Hoogstraten’s intent was to amaze and amuse. Did you think he succeeded? 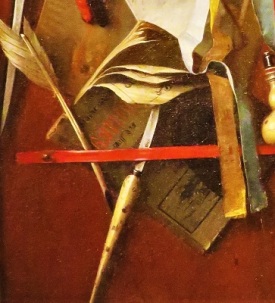 Fun Arty Fact #1:  Trompe l’oeil (French for trick of the eye) is a style of art that produces an optical illusion. We see depth where none exists. In other words, a two-dimensional painting appears to be 3-D. Trompe l’oeil is a subgenre of still-life paintings. Outside the museum, modern-day trompe l’oeil can be found on building façades.

At the high point of his career, Rembrandt was a highly selective teacher. He refused beginners, charged an exorbitant tuition (100 guilders), and broke with the usual custom of providing students with room and board. Van Hoogstraten and his fellow students learned by copying their master’s work. They studied in an attic with each workstation separated by paper or canvas sail cloth.

After completing his studies with Rembrandt, van Hoogstraten was considered a master painter. Early in his career he painted portraits, eventually branching out into religious and historical scenes, as well as still lifes. Van Hoogstaten was fascinated with perspective and his resume also includes mesmerizing puzzle boxes and a variety of trompe l’oeils. 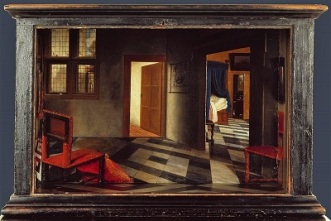 A sought-after talent, van Hoogstraten worked in Amsterdam, London, Rome, Vienna, and the Hague. However, in the final years of his life, he returned to his hometown of Dordrecht where he penned his manifesto on art, Inleyding tot de Hooge Schoole der Schilderkonst: Anders de Zichtbaere Werelt (Introduction to the Academy of the Art of Painting: Otherwise known as the Visible World). Published the same year as his death in 1678, van Hoogstraten’s treatise not only includes his illustrations and theories on art, but also anecdotes of his time spent with Rembrandt.

If you’d like to view more of his work, click on this Samuel van Hoogstraten link, courtesy of Google Arts & Culture. Click on Museum Bites: Comfort Food Quick Bite if you’d like to learn more about still-life paintings.

That wraps up our look at Samuel van Hoogstraten’s Trompe l’Oeil Still Life. I’ll be back next week with more Museum Quick Bites. Until then, be safe, be kind and take care 🙂

New York Times: ART; Demonstrating How Exciting the Still Life Can Be (1999)