Today on Museum Bites we’re breaking out the bling and trying on some rings. The ancient Egyptians were the first to decorate their digits and during the past several millennia rings have ranged from the austere to the outrageous. Join me for a brief look at three unique examples. We begin with a goddess…

One Ring to rule them all,
One Ring to find them,
One Ring to bring them all
And in the darkness bind them.
~ J. R. R. Tolkien, Fellowship of the Ring (1954)

Mighty Aphrodite:  Our first ring hails from ancient Greece and features the goddess of love, Aphrodite. Etched in radiant gold, the goddess stands with one hand on her hip and the other outstretched over a winged creature that lies at her feet. Look closely and you can see the intricate folds of her peplos (tunic worn by ancient Greek women) as well as the tiny details of her face and sleek chignon. 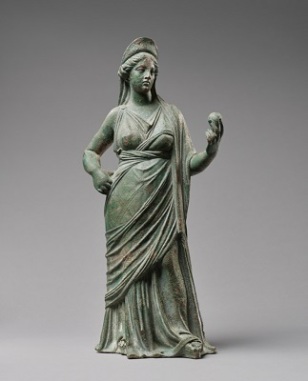 Aphrodite was a popular figure displayed on jewelry during this era of Greek history. Ancient lore states the goddess was born from the castrated bits of the god Uranus after they were tossed into the sea. She was the patron goddess of love, fertility, prostitutes, and sailors. Despite some wear and tear, this 2,000+ year old ring still has the ability to dazzle.

State of the Art:  Handcrafted from sterling silver, our next ring was created by Margaret De Patta (1903-1964). This funky ring featuring a cluster of geometric shapes is an excellent example of wearable art. Trained as a painter, De Patta got her start in jewelry making in 1929 when she became engaged. After several failed attempts to find a suitable ring, De Patta and her fiancé gave up the search and she crafted her own ring. And voilá, a new career was born.

Primarily self-taught, De Patta created one-of-a-kind rings, bracelets, brooches, and necklaces. Many of her pieces incorporated movable parts, allowing the owner to rearrange and adjust the jewelry to their delight. De Patta was a key figure in the studio jewelry movement and her work has been exhibited from coast to coast. Click on this Margaret De Patta link courtesy of Art Jewelry Forum, to learn more about her life and view more of her work. 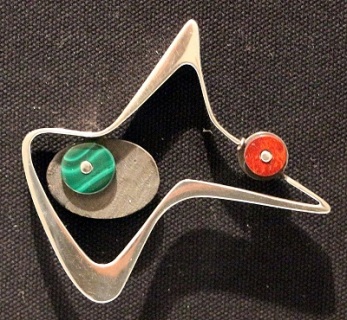 Scorpion King:  Our final ring is a beady-eyed scorpion made for the ruler of the Asante (from modern-day Ghana). Crafted from gold this bulky bauble (~3 ½ inches x ~3 ½ inches) was a symbol of the king’s authority and wealth. Like our mighty Aphrodite ring, much attention has been given to detail. The scorpion’s body is lined with decorative designs, while tiny pincers and a forked tail appear ready to strike. 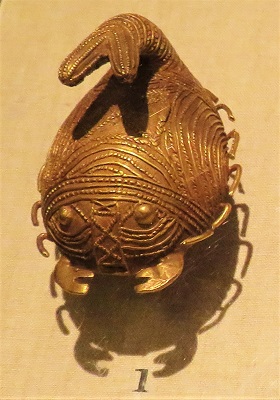 Gold and scorpions have played starring roles in Asante culture. A main source for trade, and considered the “embodiment of the sun”, gold was historically only worn by royalty. In Asante folklore, the swift and merciless scorpion is a symbol of the king’s cunning and power. If you’d like to view more Asante art, click on this Asante Arts & Crafts link, courtesy of the Detroit Institute of Arts.

Frightening Fact #1:  Of the almost 2,000 species of scorpions, approximately 30 to 40 have enough venom to kill you. Click on this video courtesy of Brave Wilderness, to watch a scorpion strike.

Frightening Fact #2:  The egolu is a ring fashioned into a concealed weapon. Worn on the pinkie finger and carefully tucked into one’s palm, the egolu is used to slash and gouge an enemy’s face.

That wraps up our look at rings. I’ll be back next week with more Museum Bites. Until then have a great week!