Grab your toga, because today on Museum Bites we’re kicking off the New Year Roman-style with a celebration of Janus. This ancient god of transitions was dutifully worshiped by the Romans and today is depicted in time, space, and art. Join me for a brief look at this uniquely Roman god. We begin by dialing back the clock approximately 3,000 years…

Janus the God:  Janus is a two-headed Roman god with dual faces that gaze in opposite directions. He is the god of beginnings and endings because he can look both forward into the future and backward into the past. To the ancient Romans, Janus also served as a gatekeeper between heaven and hell and thus he became the patron of all entryways. The month of January derives its name from Janus, and a festival in his honor, called the Agonium, was celebrated by the Romans on January 9th.

Numa Pompilius (c700 BCE), the second king of Rome, commissioned Janus’s most famous shrine, the Janus Geminus. Made entirely of bronze, this roofless structure sported double doors at both ends. Inside a bronze statue of Janus stood in the center, with a key for the gate in one hand and a staff to guide the faithful in the other.

The Roman army made a habit of stomping through the Janus Geminus prior to each campaign, believing this pre-war ritual would bring them success in battle. During wartime, the arched doors of the shrine were flung open and when Rome was at peace, the doors were firmly shut. Unfortunately, no remnants of this ancient building exist today, but coins minted during Nero’s reign (54–68 CE) depict an image of the Janus Geminus with the doors closed.

Fun Festive Fact: Ancient Romans rang in the New Year by gifting friends with coins and sweet treats made of honey, figs, and dates. Roman priests, on the other hand, honored Janus with less tasty offerings of barley cakes and salted spelt.

Fun Janus Fact:  The Shrine of Janus Geminus is not to be confused with the door-less Arch of Janus, a hulking three-story quadrifrons built during the 4th century CE and located in Rome’s Forum Barium. 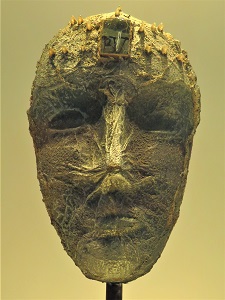 Janus in Art:  A haunting depiction of Janus is on display at the Flint Institute of Art (FIA). Bertil Vallien’s Janus (1999) was crafted from sand cast glass. A pinch-faced Janus gazes into the future while his skull-like counterpart either (depending on your vantage point) stares into the past or his mirror image. Is his expression one of regret? Despair? Stoicism? Hope? Contentment? Or something else entirely? You decide.

Vallien’s interpretation of Janus is unique in that the faces are not twin images. He is best known for pioneering the modern technique of sand casting glass. Click on this Bertil Vallien link to see more of his stunning artwork. Click on Museum Bites: The Art of Glass-Part 1 and Museum Bites: The Art of Glass-Part 2 to view more of the FIA’s dazzling display of glass art.

Janus in Space!  In addition to being revered in art and lore, Janus can also be found in outer space. Discovered in 1966 by French astronomer and hot-air balloonist, Audoin Dollfus, Janus is one of Saturn’s 61 moons. Scientists have waxed poetic about the heavily cratered moon’s appearance, likening it to a potato and my personal favorite, a meatball. Janus co-orbits Saturn with fellow moon, Epimetheus in the gap between rings F and G. Because of their gravitational interaction, Janus and Epimetheus swap positions (one moon is slightly closer to Saturn than the other) every four years. This unusual orbital relationship is the only known one of its kind.

Fun Celestial Fact:  The Cassini spacecraft was launched on October 15, 1997, from Cape Canaveral Air Force Station. The Cassini-Huygens Mission was sponsored by NASA, the European Space Agency (ESA), and the Italian Space Agency (Agenzia Spaziale Italiana). Cassini’s destination was Saturn but it gathered data and captured breathtaking images of planets and other celestial phenomena along the way. Cassini’s 4.9 billion-mile trip ended after 20 years with its Grand Finale mission, a planned descent into Saturn’s atmosphere where it ultimately burned up. Click on Cassini’s Grand Finale video courtesy of NASA, to watch an animated depiction of the spacecraft’s final flyby.

That wraps up our look at Janus of the past and present. Next week, we’ll be digging into a variety of colorful canvases. In the meantime, have a fantastic week!

American Journal of Archaeology: The Shrine of Janus Geminus in Rome (1943) by Valentine Müller

Museum Bites: The Art of Glass-Part 1

Museum Bites: The Art of Glass-Part 2

National Geographic: How Many Moons Does Each Planet Have?