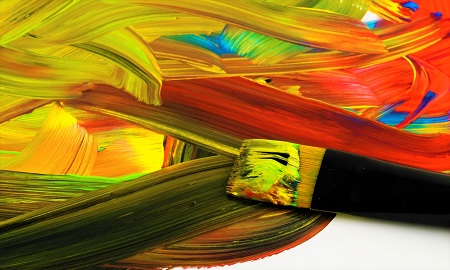 Today on Museum Bites we’re getting our French on. So kick back, pour yourself a refreshing glass of vin, and enjoy this reboot of Coloring Outside the Lines…

In the first half of the 19th century, art and artists were under the control of the French government. The Académie Royale de Peinture et de Sculpture prescribed a rigorous and precise education. The successful artist featured subjects from history, religion or mythology and their work was educational and inspiring. Colors were somber and brush strokes imperceptible.

Each year the Académie des Beaux-Arts sponsored the Salon, the largest and most famous exhibition in Paris. Thousands of paintings from all over the world were entered and judged by a small panel of jurors. An enthusiastic thumbs up from the jury signified a premier spot in the exhibition hall and in-your-face bragging rights. A thumbs down meant a red “R” was stamped on the rejects or worse they were hung in a back room to be heckled by art critics and the public alike. Note darling of the Salon, Jean Auguste Dominique Ingres’s academic style.

Frustrated by the Salon’s cruel and oppressive process, a small group of artists launched a rebellion. Calling themselves the Anonymous Society of Painters, Sculptors, and Printmakers, etc., they decided to hold their own unjuried art exhibit. Members split the cost and rented space in a photography studio. Liberated from the strict rules of the Salon, they displayed the art they yearned to create and welcomed any and all artists to join them.

On April 15, 1874, they threw open the doors and a curious public streamed in. The wild and vivid paintings sent shockwaves through the art world. These Anonymous Society upstarts were deemed a sloppy and crude bunch. Their paintings were too urban (think: cafes, theaters, dance halls), the colors were too bright, and the images too blurred. Horror of horrors, you could even see the brush strokes!

Art critic, Louis Leroy famously derided Claude Monet’s, Impression, Sunrise (1872) as unfinished and crude. He complained that Monet’s work was nothing more than an “impression”, not even a complete painting.

Color is my daylong obsession, joy, and torment.
~ Claude Monet

Fortunate for us, the Anonymous Society of Painters, Sculptors, and Printmakers, etc. (aka Impressionists) thumbed their noses at the naysayers and continued to paint their bold impressions. I was thrilled to view some of their work on a recent visit to the Detroit Institute of Arts.

The creation of a painting takes as much trickery
and premeditation as the commitment of a crime.
~ Edgar Degas

Morning Ride (c1866) by Edgar Degas (1834-1917): Edgar Degas was one of the founding members of the Anonymous Society of Painters, Sculptors, and Printmakers, etc. Contrary to his strict, academic training at the École des Beaux-Arts, many of his paintings capture moments in urban life. Degas emphasized line and form in his paintings, as opposed to light like his fellow Impressionists. He turned to sculpture in his old age, when failing eyesight prevented him from painting. An injury he received while fighting in the Franco-Prussian War (1870-1871) may have contributed to his poor vision. Click on this Edgar Degas link to learn more about his life and art.

I have been for forty years discovering
that the queen of all colors was black.
~ Pierre-Auguste Renoir

The White Pierrot (1901-1902) by Pierre-Auguste Renoir (1841-1919): Pierre-Auguste Renoir was also a student at the École des Beaux-Arts and along with Claude Monet, one the most recognized members of the Impressionist movement. Despite painting plein air (outdoors) with friends and future members of the Anonymous Society of Painters, Sculptors, Printmakers, etc., Renoir is best known for his clever use of light and “fascination with the human form”. For a time he painted portraits on commission. Attacks of rheumatism later in life prompted him to move to the gentler climes of Southern France. Renoir eventually became unable to walk but refused to stop painting. So crippled with arthritis he tied a paintbrush to his hand when his fingers ceased to work. Click this Pierre-Auguste Renoir link to learn more about his life and work.

The day is coming when a single carrot,
freshly observed, will set off a revolution.
~ Paul Cézanne

The Three Skulls (c1900) by Paul Cézanne (1839-1906): Paul Cézanne’s early paintings are dark and moody. However, once he began painting plein air with Camille Pissarro (1830-1903), a founding member of the Anonymous Society of Painters, Sculptors, Printmakers, etc. his work took on lighter and brighter tones. Considered the Father of Modern Art, Cézanne’s distinct and concise brushstrokes influenced Cubism. Cézanne spent only a short time in Paris, preferring to paint in his hometown, Aix-en-Provence. He had a grand falling out with his childhood friend and number one fan, Émile Zola, after the publication of L’œuvre (The Masterpiece).  The main character in Zola’s book is a failed painter and said to be based on Cézanne. Struggling to sell his paintings at the time, Cézanne took issue with the similarities. To view his work and learn more about his life, click on this Paul Cézanne link.

That wraps up our look at the wily and rebellious impressionists. Next week, we’re hitting the road with a trip down Route 66. Until then have a fun and festive week!

The Metropolitan Museum of Art