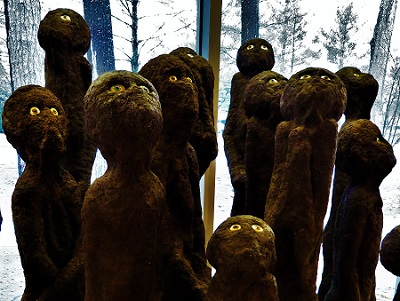 Today on Museum Bites we’re wrapping up our visit to the Dennos Museum Center with a stroll through the modern art wing. This eclectic collection features local artists whose works range from the whimsical to the grief-stricken. We’ll pay tribute to the culinary arts, meet a supporting lady, and kick back in a moonlit field. We begin in the kitchen…

The only time to eat diet food is while you’re waiting for the steak to cook.

Culinary Art:  Paul Welch and Robert Holdeman’s Bakery Cathedral (c1970s) is a colorful homage to the humble mixer. The artists have transformed this industrial grade beater into a dazzling work of art by embedding stained glass into its open segments. The result is dazzling. Even on a gray, rain-soaked day, the Bakery Cathedral shimmers with color.

In 1992, the Michigan State University Museum began cataloging the state’s rich supply of stained glass. The Michigan Stained Glass Census features lovely works of art in places of worship as well as homes, businesses and public buildings throughout the state. Click on this Michigan Stained Glass Census link to view the 1,000+ entries. Included in this inventory are many works by glass guru, Louis Comfort Tiffany of Tiffany lamp fame. Click on Museum Bites: Cutting Edge to learn more about Tiffany’s life and work.

Fun Foodie Fact: Foodie goddess, Julia Child brought French cooking to the masses in the early 1960s. She wasn’t the first TV chef, but she is perhaps the most well-known. During World War II, Julia worked for the Office of Strategic Services, a precursor to the CIA. Click on this video clip of Julia Child using a mixer to whip up a delicious batch of French crepes, courtesy of PBS.

Animated Art:  Dewey Blocksma’s whimsical Cello Woman is another piece that would be right at home in a French kitchen…an animated kitchen that is. Towering over the room on her spindly legs, Cello Woman looks like a character straight out of Disney’s Beauty and the Beast (1991 & 2017). With arms folded in front of her, she appears ready to perform. Will she burst out in song or tap out a snappy jig in her sensible blue shoes?

Be our guest, be our guest. Put our service to the test!

In addition to creating fun and festive art, Blocksma has worked for many years as an emergency room physician. You can read more about his life and art by clicking on this Dewey Blocksma link.

Fun Noteworthy Fact:  The cello was created during the 16th century. These early versions had five strings and were made to support an ensemble’s bass line. The modern-day cello has four strings, (C-G-D-A) and since the 17th century has stepped up to play a starring role in the orchestra. Zoe Keating is a talented composer and cellist. Click on this Zoe Keating link to enjoy a sample of her music.

Ghostly Art:  Burial Ground (1996-2001) by William Allen is a haunting life-size sculpture of ghostly figures. With shoulders hunched, they huddle together, their glowing yellow eyes gaze up at some unknown horror. Similar to The Scream (1893) by Edvard Munch, their frozen expressions range from fearful to curious to accepting. A grief-stricken Allen was inspired to create this piece while caring for his terminally ill mother. If you’d like to view more of his work, click on this William Allen art link.

Fun Screamy Fact: Edvard Munch created several versions of The Scream. The inspiration for these iconic paintings came while Munch was out walking at sunset with two friends (seen in the background). The sky, according to Munch was a vibrant, blood red and he “sensed an endless scream passing through nature”. 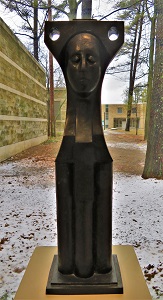 Supporting Art:  Cast in somber repose, Susanna Linburg’s Caryatid IV (1981-1988) is a captivating bronze sculpture. The subject’s tranquil expression and blocky headpiece bring to mind prayerful nuns, with their hair primly tucked inside severe, face-pinching wimples and sporting wide-brimmed cornettes–think: Sally Field in The Flying Nun (1967-1970). A caryatid is a column sculpted into the figure of a woman. First crafted by the Greeks, caryatids have been used to support the Acropolis as well as Roman favorites, the Pantheon and Forum. To learn more about Susanna Lindburg’s life and work, click on this Susanna Linburg link.

Fun Flying Fact:  The Daughters of Charity, a French order of Catholic nuns, were famous for wearing the cornette from 1685 to 1964. This starched beauty was patterned after headpieces worn by peasant women during the 17th century. In the 1960s the Daughters tossed their cornettes to the heavens. Daily chores such as driving and work as surgical nurses called for a more practical form of dress. Today, the Daughters wear blue dresses or skirts, veils are optional.

Risky Art:  We wrap up our tour of the Dennos Museum Center with Gregory Nachazel’s Daucus Carota (Wild Carrots, 2009). This enchanting piece features a couple cuddling in the backseat of a Corvair. Parked in a field and basking in the moon’s glow, Daucus Carota is reminiscent of summer nights, star gazing and young love. Can you hear the crickets chirping and feel a warm breeze ruffling the sprigs of Queen Anne’s Lace, (aka Daucus Carota)?

But wait, this idyllic scene also has a dark side. In addition to the infamous Corvair (see Fatal Facts below), the Daucus Carota plant has been described by the United States Department of Agriculture as invasive, noxious, and weedy. Furthermore, it bears a striking resemblance to hemlock, a poisonous plant made famous by the Greek philosopher, Socrates (470-399 BCE).

Fatal Facts:  In his book, Unsafe at Any Speed: The Designed-In Dangers of the American Automobile (1965), consumer activist, Ralph Nader blasts the auto industry for caring more about a car’s style than its safety features. He took particular issue with the Corvair since a design flaw in the suspension could cause drivers to lose control and roll over. Often a fatal event in the days before seatbelts, airbags and antilock brakes. In 1966, Nader testified before Congress and soon after, the 1966 National Traffic and Motor Vehicle Safety Act was passed. Sales of the Corvair plummeted and in 1969 General Motors discontinued manufacturing this model. Click on this hemlock versus Queen Anne’s Lace (aka daucus carota) to learn more.

That concludes our tour through the Dennos Museum Center’s exhibition of modern art. I’m heading out on another adventure so next week we’ll be digging into the archives and taking a trip across the Golden Gate Bridge. In the meantime, have a great week!