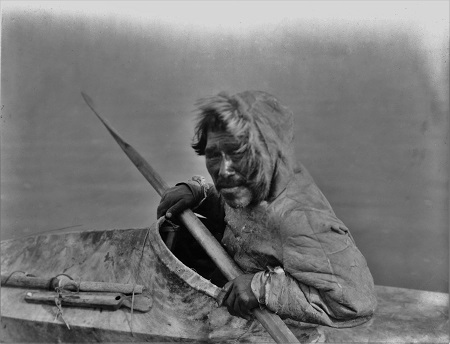 Ear pulls, knuckle hops, and dropkicks! Get your game face on because today on Museum Bites we’re gearing up to play…the Inuit way. Life within the Arctic Circle is often a cold, dark, and brutal existence. But the Inuit have devised simple and clever games that entertain as well as hone skills necessary for surviving and thriving in this harsh climate. Join me for a tour through the Dennos Museum Center’s delightful exhibition of traditional Inuit games. We begin with the ear pull…

Arctic Circle — The parallel of latitude that is approximately 66¹/₂ degrees north of the equator and that circumscribes the northern frigid zone.

Ear Piercing:  The Inuit have transformed the lobe-stinging ear pull into an art as well as a contest of wills. Two players face off and a loop of string is placed around one ear of each opponent. A signal is given and the players struggle and strain to unstring their opponent without jerking or using their hands or other extremities.

Lobes get wrenched and sometimes twisted into the string, resulting in cuts, bruises, and sometimes stitches. A winner is declared when a player concedes or the string is dragged off an opponent’s ear. Ear pulling may seem strange, but it is effective in building up a tolerance to pain, an integral part of life in the Arctic Circle.  Click on this ear-pulling contest link to witness a modern-day version of the game.

High Stepping:  The traditional Inuit high kick requires strength, agility and extraordinary balance. Prior to play, a small bone or piece of fur is wrapped in string and suspended from a tree or tall frame.

Players take turns trying to kick the object with one or both feet. There are several variations to this fast-paced game. For example, some single-foot contests require players to keep a hand planted on the ground when executing a kick, while others are allowed to take a running start. Perhaps the most challenging version has players launching both feet at the target. Opponents battle it out in single-elimination rounds, with each round raising the height of their foot-seeking target. The winner no doubt earns his or her bragging rights until the knuckle hop champ bounces by.

Knuckle Hopping:  The knuckle hop is one of the most rigorous Inuit games. Players drop into a plank position and with a closed fist, balance on their knuckles and toes. And if that weren’t enough, they then hop while firmly maintaining their knuckle-plank pose. The player that hops the farthest while maintaining this abs-of-steel position is declared the winner.

Strength, agility and a serious degree of pain tolerance are needed to manage the knuckle hop. Mastering this “game” is excellent training for life in the Arctic, especially when hunting in frigid temperatures and navigating the precarious ice floes. Click on this knuckle hop clip (with bonus high kick demonstration) to see this fierce test of strength in action.

War Gaming: Our final game is a team sport often played by the entire community. Players pass a small ball made of stuffed animal skin using a racket made of sealskin. The object of the game is for teammates to work together to maneuver the ball up the field and through a goal to score points. Efforts are made to prevent the opposing team from stealing the ball or obtaining points. The team that scores the most goals wins. Sound familiar? This Inuit style ballgame is a modified version of lacrosse. Running up and down the playing field while wielding a lengthy racket and no doubt getting bashed by said racket, requires endurance as well as fortitude.  This ancient Native American game was used to train tribe members for combat. The Cherokee referred to lacrosse as the “little brother of war”. Like their other games, the Inuit used lacrosse as a way to keep fit in an effort to better tackle the unforgiving climate.

Fun Bouncy Fact: The Inuit blanket toss is not only fun, it was a clever hunting tool. Inuit hunters used a sealskin blanket to launch one of their members high in the sky. This lofty vantage point helped the huntsmen better locate potential prey. Today this Inuit version of the trampoline has become a popular entertainment at Inuit festivities. Click on this Inuit Blanket Toss clip for a look-see.

That wraps up our discussion of traditional Inuit games. Next week, we’ll return to the Dennos Museum Center, to learn more about Inuit art and culture. In the meantime, have a fantastic week!

One thought on “Survival Games”