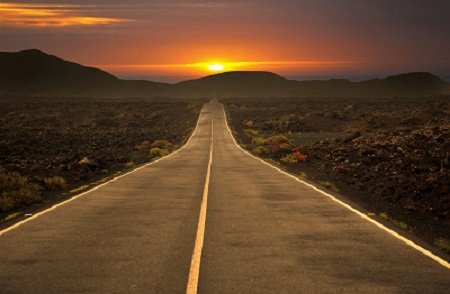 Today on Museum Bites we’re hitting the road with a trip back to ancient Rome. Known for its backstabbing politics, grisly entertainments, and comfortable party wear, Rome was also a hotbed of innovation. From military tactics to infrastructure, to arts and entertainment the ancient Romans also produced a wide variety of handy inventions. Join me for a tour through the Cranbrook Institute of Science’s exhibition on ancient Rome. We begin this first in a three-part series, with the roads…

Apart from the sanitation, the medicine, education, wine, public order, irrigation, roads, the fresh water system, and public health…what have the Romans ever given us?! ~ John Cleese as Reg in Monty Python’s Life of Brian (1979)

Worldwide Web:  During its heyday, the Roman Empire stretched from Scotland to Afghanistan. Maintaining an iron grip on such a vast expanse required an effective system of government, powerful military, and network of roads. Rome’s durable and well-maintained thoroughfares allowed troops to travel quickly throughout the empire to crush rebellions and conquer new lands. Furthermore, this ancient worldwide web helped drive industry, improve trade, and generate a variety of road-related perks we still rely on today.

Fun Roadie Fact #1:  The Via Appia or Appian Way is one of the oldest and most famous roads. Named after Roman politician, Appias Claudius Caecus, Via Appia was constructed in 312 BCE. It was initially 132 miles long and ran from Rome south to the city of Capua. Delighted with this nifty upgrade, Romans nicknamed their new thoroughfare, longarum regina viacum or queen of long-distance roads. In 244 BCE, the Appian Way was extended an additional 230 miles (370 km) to the city of Brindisi, located on Italy’s southeastern coast.

Ease on Down the Road:  The Roman road was an impressive feat of engineering. Multi-layered for durability and meticulously straight for efficiency, thousands of backbreaking hours went into their construction. Once a route was chosen, the painstaking process of marking the most efficient path was conducted with the help of a clever piece of equipment called the groma. Comprised of a pole with a pointed end and rotating wooden cross with four plumb lines, the groma was a precursor to our modern surveying equipment.

To mark the route, the gromatici would thrust his groma into the earth and align the plumb lines on a strict North-South axis. Following the sight line, an assistant carefully marked off 125 paces, driving pegs into the ground at regular intervals. Once complete, the gromatici yanked his groma from the ground and shuffled it forward to the final peg. The groma was plunged back into the earth and the process was repeated over and over again until the entire route was marked. Then the real fun began.

Fun Roadie Fact #2: The saying, “All roads lead to Rome” did not originate in Rome.  In 1175, French theologian and poet, Alain de Lille wrote in his Liber Parabolarum, “Mille viae ducunt homines per saecula Roman”, which translates to “A thousand roads lead men forever to Rome”. In 1391, Geoffrey Chaucer wrote in Astrolabe, “Right as diverse pathes leden, diverse folk the righte way to Rome.

Rocky Road:  Following the gromatici’s pegs, laborers began road construction by digging and leveling off a three foot trench. Large, sturdy rocks were then tossed in and followed by a layer of crushed stone and cement made of lime and pozzolan. Next, a layer of sand and gravel or bits of pottery were poured on top and packed down by heavy rollers. The final layer consisted of smooth paving stones wedged into the sand and fitted together in a firmly packed mosaic.

Roman roads, like their modern cousins, were slightly arched to help with drainage. They were also painstakingly straight and often ran directly up and over steep hills. If it couldn’t be climbed than a tunnel was created. If the land was too marshy or intersected a body of water, then a bridge was built. And if an obstacle was too onerous to move or bore through only then would the gromatici allow a road to veer off course. And no gentle curves here. If a turn was required, the gromatici measured off a sharp 90 degree angle, using the East-West plumb lines of his beloved groma. These super straight roads were designed to decrease travel time and reduce marching fatigue among Rome’s troops. In addition to the roads, the groma was used to plot land, stake out military camps, and assist in city planning.

Fun Roadie Fact #3: The Romans were the first to invent the pedestrian crosswalk. Made of raised stepping stones or blocks, our modern versions are patterned after these ancient walkways.

Are We There Yet?  At its peak, the Roman Empire boasted more than 250,000 miles (400,000+ km) of road. Everyone from slave to emperor traveled these spiffy new thoroughfares whether it be by foot, horseback, ox-drawn cart or flanked by a military entourage. Roadside milestones provided key information such as who built the roads, what year they were constructed when it was last repaired, and best places to stop. The Milliarium Aureum or golden milestone is perhaps the most famous mile marker. Located in the central forum inside the city of Rome, all distances within the Roman Empire were measured from this point.

Mileage was also crudely calculated using a Roman odometer. This ancient instrument’s toothed gears were attached to the axle and outer wheel rim of Roman vehicles. According to Marcus Vitruvius Pollio (c90 – c20 BCE) of Vitruvius Man fame (click on Museum Bites: Renaissance Man to learn more) with every 400 revolutions (i.e., 1 mile) a pebble would drop into a box. At the end of their trip, Romans could count the number of pebbles to determine how many miles they had traveled. Since Roman carts were a standard size, the odometer was quite accurate. A modified version of this odometer was also used on naval ships however it was far less precise.

Fun Roadie Fact #4: The ancient Romans also invented the first dual-function hammer (aka claw hammer). An elongated notch added to the hammer head allowed users to pry out as well as pound in nails. Click on this Museum Bites: If I Had a Hammer link to learn more about the history of the ubiquitous hammer.

Without the roads there would have been no Roman Empire. Rome’s most lasting legacy in Europe is its network of roads. ~ John Shea, Stony Brook University

Rest Stop: Once the roads were complete, a network of posthouses, inns and other roadside entertainments soon cropped up. With an eye toward efficiency, posthouses were placed every 10 miles along main routes so travelers, particularly the military, could obtain a fresh mount. Mansiones were also popular rest stops. These roadside inns were a good place for weary travelers to rest, grab a bite to eat, and repair and service vehicles.

Stationarii and beneficiarii, were Roman soldiers who policed roads, provided traveler aid and collected tolls. Yes, we have the Romans to thank for toll roads. Tolls were typically collected at bridges, borders, and mountain passes.

Grisly Roadie Fact:  In 71 BCE rebels led by Spartacus were infamously crucified and their crosses posted along the Appian Way as a reminder that the Roman Empire takes an extremely dim view of rebellion. Spartacus had died in combat and was spared this horrific fate.

Ancient Rome’s vast network of durable and well-maintained roads helped cultivate and sustain an empire. Road construction and use ushered in a variety of road-related technology and industry. Many are still in use today. Click on this History Channel video clip to catch a glimpse of ancient Roman roads, road construction, and even the groma.

That wraps up our discussion of Roman roads. Next week, we’ll continue our ramble through Cranbrook’s Institute of Science with a look at ancient Roman art and entertainment. In the meantime, have a fantastic week!

Museum Bites: If I Had a Hammer

One thought on “Paving the Way”