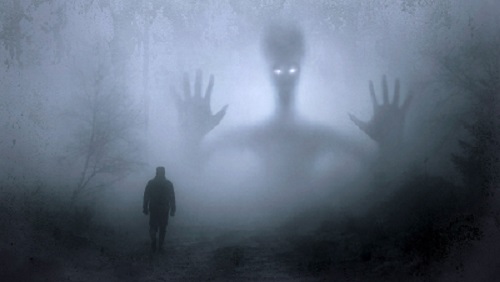 Today on Museum Bites we’re taking a walk on the wild side with a tour through the Mythic Creatures exhibit at the Grand Rapids Public Museum. Old favorites like dragons, Sasquatch, and the Loch Ness monster are on display, but the exhibit also includes a goat-sucking vampire, elephant-devouring bird, and a tobacco-loving cat.  Join me for a brief look at these lesser-known beasties. We begin in the wilds of Puerto Rico…

Goat Sucker:  Our first mythical monster is a hobbit-sized, bloodsucking beastie called Chupacabra or goat sucker in Spanish. This nasty creature has glowing red eyes, vampire fangs, slashing claws, a spike-lined back, reptilian skin, and if that weren’t enough powerful legs for leaping onto prey. Chupacabra prowls at night, feasting on the blood of livestock, and he has a particular fondness for goats.

This modern day monster began terrorizing Puerto Ricans in the mid-1990s, and attacks have spread across Mexico, Central, and South America and as far away as Russia. Investigators using DNA evidence have discovered wild dogs, coyotes and raccoons suffering from sarcoptic mange are the likely culprits of the late night livestock munching. A highly contagious mite infestation, sarcoptic mange causes hair loss and raw skin due to intense scratching. Hence the reptilian skin and ghastly appearance. Livestock blood loss is likely due to blood-sucking parasites that swoop in after kill.

Investigators also discovered that the first Chupacabra sighting came from the colorful imagination of Puerto Rican resident, Madelyne Tolentino. Her encounter with the goat sucker came shortly after she had seen the movie, Species which just so happened to feature a Chupacabra-like creature. Her animated descriptions of this nocturnal beast ignited the Chupacabra craze. Thanks to the internet, Chupacabra sightings and fears persist. The ferocious goat sucker has his own line of swag and is featured on t-shirts, bags and even action figures. Click on this BBC investigative report if you’d like to learn more about the hunt for the goat sucking Chupacabra.

Water Dragon: Our next mythical monster is Mishepishu, a fresh-water “sea” monster, prominently featured in Native American lore, particularly those tribes that lived near the Great Lakes. This underwater dragon prowled the depths of the Great Lakes and had a cat-like face, body covered with scales, and horns made of copper. On his good days, Mishepishu provided calm waters and allowed those brave enough to chip copper from his horns (click on this Museum Bites Copper Fever post to learn more about this copper-rich area). However, when he was in a foul mood, Mishepishu thrashed his massive tail and whipped up severe storms. To appease the mercurial beast, Native Americans tossed tobacco leaves over the sides of their canoes. Stories of Mishepishu and treacherous Great Lakes crossings are depicted in ancient Native American pictographs along the rocky shores of Lake Superior.

Violent storms are not uncommon on the Great Lakes. Over 6,000 shipwrecks have been recorded and over 30,000 lives lost. The wreck of the Edmund Fitzgerald on November 10, 1975, is perhaps one of the most famous Great Lakes shipwrecks. While crossing Lake Superior, the massive freighter battled gusts of up to 70 knots (80 mph) and waves up to 25 feet. She lost radar and radio contact, and eventually succumbed to the water taking all 29 crew members with her.

Elephant Bird:  Our final mythical beast is the Roc, a giant, elephant-devouring bird of prey. Tales of the Roc’s ferocity are featured in The One Thousand and One Nights (aka The Arabian Nights). Sinbad and his merry band of sailors got tangled up with a Roc when they mistook its nest for an island.

While exploring this newly discovered isle, they came upon a large, domed building that had no doors. Imagine their surprise when a Roc chick began to peck its way out of the “building”. Sinbad and his sailors quickly caught on that this was a massive egg and promptly decided to kill and eat the baby chick. Eventually, the chick’s parents returned and upon learning their baby had been turned into lunch, they began pelting the sailors with rocks. In a hail of boulders, Sinbad and his crew escaped, suffering the loss of one sailor and a badly damaged ship.

Marco Polo (c1254-1324) also related tales of the ruthless Roc. He claimed to have encountered the giant bird on the island of Madagascar and went so far as to present a Roc feather to Kublai Khan. The leader of the Huns was apparently quite tickled with the gift. Historians speculate that it was most likely a palm frond from the raffia tree, prevalent on the island.

Madagascar was also once home to the Aepyornis, also known as the elephant bird, an extinct member of the ostrich, rhea and emu family. This giant, flightless bird measured 10 feet tall and weighed up to 1,000 pounds. Madagascar is riddled with fossilized Aepyornis eggs, the largest measuring 35 inches in circumference. For comparison, the circumference of the average basketball is between 29 and 30 inches.

Tales of the Roc may have come from a mashup of Aepyornis and Garuda, a mythical half-human half-bird creature who preyed on elephants and giant snakes. To learn more about the wonders of the elephant bird, click on this BBC video clip featuring the delightful David Attenborough.

That wraps up our discussion of these lesser known mythical creatures. Next week we’ll continue our tour through the Grand Rapids Public Museum. Until then, have a fantastic week!