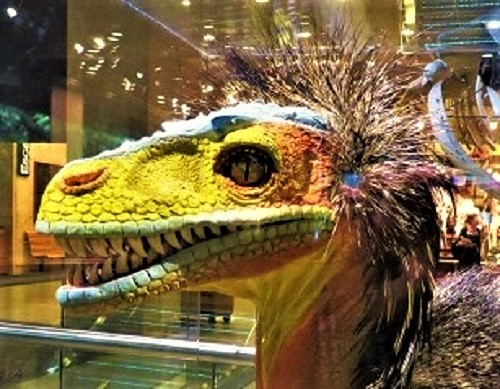 Today on Museum Bites we’re continuing our tour through the Milwaukee Public Museum with a look at their colorful collection of fantastic beasts. From ferocious to festive, find out what a pre-Columbian Bart Simpson, doubled-jointed monster, and rain god with an overbite have in common. Our first stop is the ancient Aztec empire.

Toothy Beast: Cloudy with a Chance of Human Sacrifice

This toothy incense burner represents Tláloc, a benevolent but often vengeful Aztec god of rain and water. When Tláloc was feeling the happy, the sun shone or gentle rains nourished the earth. But when he was cranky, floods, hurricanes, and even drought were the order of the day. To appease his wrath, Tláloc’s faithful periodically sacrificed children, believing the tears of their innocent victims would bring about favorable weather. According to Aztec lore, Tláloc was also responsible for a host of chronic conditions, including leprosy, dropsy, and rheumatism. Individuals who perished from these maladies were buried as opposed to the tribal norm of cremation. A grave that sported flowers or thriving vegetation was a sign the deceased had been accepted into Tlálocan and was blissfully whiling away the afterlife with their favorite rain god. Whether or not these souls had any influence over Tláloc’s weather forecasts, is unclear.

Tláloc has been featured in art as far back as the 1st century BCE. Images and statues are prevalent throughout Mexico and Central America. Pictured right, is a drawing of the mighty Tláloc from the ancient Aztec manuscript, the Codex Borgia. Note the large, protruding teeth!

This short, squat figurine was created by the Chancays, an ancient civilization that thrived along the central coast of Peru from 1000 to 1500 CE. The Chancays are known for their black-on-cream ceramics, fiber arts, and metal and woodworking. Despite their sophisticated textiles, Chancay pottery was simply and more playfully designed. Jars were often modeled after human faces and figurines typically sported stubby arms and intense black eyes. The I-didn’t-do-it pose gives this ceramic beast an impish vibe. It reminds me of a less colorful Bart Simpson with the anatomically correct number of fingers and toes.

The Chancays lived near Pachacamac, a popular burial and pilgrimage site. Pachacamac was named after the “maker of the Earth” god, and like his god-cousin, Tláloc, Pachacamac dabbled with the elements. His bad moods resulted in earthquakes and fortunately, the Chancays did not appease him with human sacrifice. The Chancays were eventually conquered by the Incas in the 15th century.

Feathered Beast: All the Better to Eat You With My Dear

This colorful dromaeosaur display is the stuff of nightmares. Smaller and more colorful than its velociraptor cousin, this feathered beast was tricked out with a variety of prey-devouring features including long front arms for scooping, three-clawed hands for tearing, two middle toe sickle claws for slashing, and a full set of serrated teeth for gnashing. It hunted in packs and for a dinosaur, was relatively intelligent. And if that weren’t enough, the dromaeosaur’s wrist joints could lash out sideways…like a switchblade. Birds today have this same double-jointed ability—referred to as the flight stroke—and use it to fly. Despite sporting feathers, the dromaeosaur was however, unable to fly. Lucky for us, this feathered monster lived during the Cretaceous Period (145 to 66 million years ago) and is only featured in tightly sealed museum displays…and for some of us, our nightmares.

Festive Beast: Bird is the Word

Our final beast hails from the island of New Britain, located off the coast of Papua New Guinea. This elaborate fowl-themed headdress was worn by the Gunantana people, most likely during one of their ceremonial milestones. Masks and elaborate headgear are predominantly featured in the many rituals practiced by tribes of Papua New Guinea. For example, the all-male Dukduk secret society is known for its brightly painted five-foot masks. Members of the group don these fierce costumes when doling out punishment. The enormous size conceals the Dukduk’s identity and the bright and whack-a-doodle designs no doubt terrify their victims.

The bird-armed figure featured on this headdress seems less menacing. Perhaps it was worn during more light-hearted Gunantana events. It certainly would give new meaning to the chicken dance, a silly and often dreaded American wedding reception tradition. Click on this chicken dance link if you’re not familiar with this shake your tail feather ditty. Warning! You will have this annoying earworm stuck in your head for the next several hours if not days.

And now for something completely different…

A trip to the Milwaukee Public Museum would not be complete without a tour through the Streets of Old Milwaukee.  I first visited this “walk-through diorama” as a child back in the 1970s. It was my first museum experience and I was hooked. My parents, sister and I strolled along the cobblestone streets with gas lamps casting a warm glow on the various shops and homes. We took our time, peeking in windows, marveling at the antiques, and overall enchanting life-size playground. I was thrilled to walk the Old Streets once again and I highly recommend you pop in for a visit. In the meantime, click here if you’d like to take a Streets of Old Milwaukee virtual tour.

That wraps up our Milwaukee road trip. Next week, we’ll be going Dutch with a reboot of legendary gift-giver, Sinterklaas. Have a great week!

Acknowledgements:  A big thank you to Dawn Scher Thomae, curator at the Milwaukee Public Museum for her last minute help tracking down information on the Gunantana headdress from Papua New Guinea.