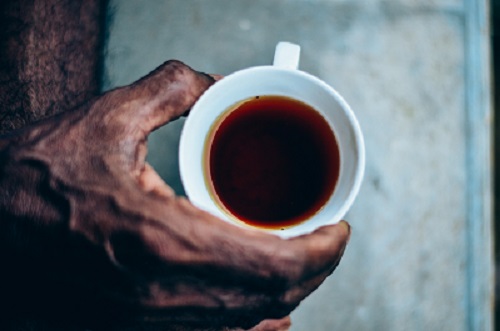 We’re putting the kettle on to boil because it’s tea time here at Museum Bites. Whether you like it hot, iced, sweetened, mixed with lemonade (thank you Arnold Palmer) or beer (yes, that’s a thing), tea is the world’s most popular beverage. We not only drink it, we have used tea to forecast our future, treat our puffy eyes, soothe our sore throats and my personal favorite, cure baldness. Join me for a brief look at the amazing story of tea.

Tea Fever: Tea was introduced in Japan in the 9th century by Buddhist monks, Kūkai (774-835) and Saichō (767-822). They had sipped the pungent brew while studying in China. Smitten, they returned home to Japan with tea tree souvenirs. It took some time for tea to become popular among the public, but eventually, the Japanese developed an ethos that includes elaborate ceremonies celebrating tea.

Tea did not become popular in Europe until the 16th century when Dutch traders brought back boat loads of tea from China. The exotic Eastern brew became an exclusive and fashionable drink with the help of Catherine of Braganza (1638-1705), a Portuguese aristocrat, who married King Charles II of Britain. Tea fever swept the continent and throughout the British colonies. Faster ships, like the clipper, were built to expedite trade and keep up with the demand for tea.

By 1700 the price of tea was ten times higher than coffee. Due to the exorbitant price, the British stopped buying tea with silver and instead began trading opium. Many Chinese citizens became addicted, and conflict arose between China and Great Britain. The resulting Opium Wars broke out during the mid-1800s.

Just Add Water:  Tea also played a role in sparking a revolution in the American colonies. In April of 1773, the British government imposed the Tea Act, which allowed the bankrupt East India Company to establish a monopoly on tea in the American colonies. Despite the lower tea prices, colonists were outraged by Britain’s heavy-handed manipulation of excise regulations in favor of the British owned tea company. On December 16, 1773, Samuel Adams and his band of rebels disguised themselves as Mohawk Indians and boarded three East India Company ships anchored in Boston Harbor. These Sons of Liberty dumped 342 chests valued at £18,000, into the water. The British government retaliated by imposing the Intolerable Acts, which eventually led to the American Revolution in 1775.

All the Tea in China:  The East India Company also had a hand in tea-related espionage. In 1848, they hired botanist, Robert Fortune (1813-1880) to sneak into China for the sole purpose of stealing the secrets of tea farming and production. Disguising himself as a wealthy official from a distant province, Fortune and his guide boldly requested a tour of a manufacturing plant. Fortune observed, recorded and helped himself to samples of all that he witnessed. He subsequently smuggled tea tree seeds and experienced tea workers into Darjeeling, India where the East India Company waited primed and ready to cultivate and sell their own tea. Within a few short decades, India outpaced China in tea production.

Tea Time:  Today, people around the world still have a strong thirst for tea, whether it is a buttery Tibetan Po Cha, a robust Russian zavarka, or a sweet Taiwanese bubble tea. Tea pairings—a Western concept—are also on the rise. Similar to wine pairings, a tea sommelier provides suggestions on optimal tea and food combinations.

The kettle has started to whistle and it’s time to brew up a hot mug of chai. Next week, I’ll be off on an adventure so we’ll be digging into the archives with a look at ancient glass. In the meantime, have a great week!

Sarah Rose, (2010), For All the Tea in China: How England Stole the World’s Favorite Drink and Changed History

One thought on “Tea Time”