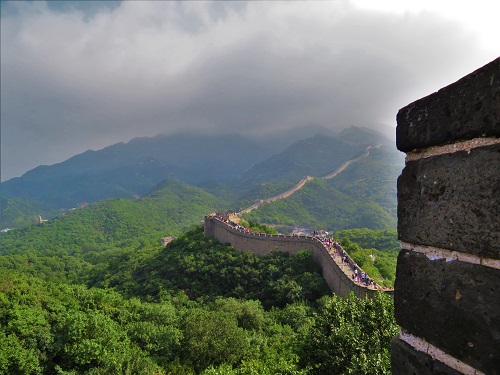 Today on Museum Bites we’re continuing our trek through China with a breathtaking hike atop the Great Wall. The Great Wall…I’m still having a hard time wrapping my head around the fact that my trusty Tevas and I were standing on this vast and ancient landmark.

Together we jostled through the shoulder-to-shoulder crowds and step by grueling step scrabbled up and down the steep inclines. Eventually, the mountain breeze began to cool, the crowds began to thin, and the view was nothing short of majestic.

From the Gobi Desert to the Yellow Sea, the Great Wall zips up, down and over China’s northern terrain. Qi Shi Huang, China’s newly anointed first emperor (see Qi’s Way), began construction in 221 BCE. The hammers and chisels were laid to rest in 1644 when the Manchus breached the Wall and overthrew the Ming Dynasty. The Great Wall’s main purpose was to prevent invasion, but it also defined China’s borders, showed off its strength, protected trade routes, and in the case of the Qing Dynasty (i.e., the usurping Manchus), prevented the Chinese from leaving.

Here are more Great Wall bites for you to munch on…

For over 2,000 years, the Great Wall has withstood warfare, natural disasters, and the ravages of time. I am humbled and thankful for my good fortune to stand upon it and witness its majesty and might.

Click on this link and take a magical flight over the many and varied segments of the Great Wall. Next week, we’ll continue our Chinese adventure with a visit to the Forbidden City. Have a fantastic week!

3 thoughts on “Climbing the Wall”