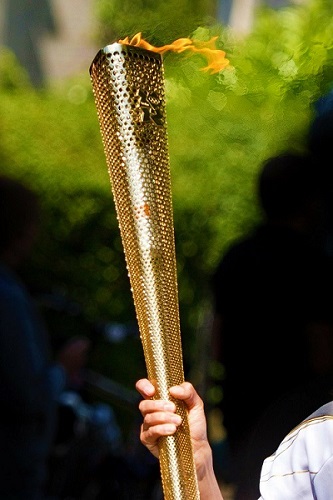 Dear Museum Biters — I’ve been scribbling away in my notebook and snapping a crazy amount of photos of my latest adventure. I’m heading back to the homeland and looking forward to sharing all of my fascinating finds. In the meantime, please enjoy this encore edition of See Joan Run from August of 2016.

On this date in 1984, Joan Benoit (1957- ) became the first woman to win an Olympic marathon.  Her interest in running was jump-started by a skiing accident.  When she was a sophomore in high school, she broke her leg skiing and took up running to get back in shape.

I found out I could do it [running] anywhere and anytime, didn’t have to wait for snow; I didn’t have to leave a carbon footprint behind and I could just go out and run. I just loved to run and I challenged myself with longer and longer distances every time I went out to run. –Joan Benoit Samuelson, (Interview with Nicki Miller, competitor.com, 8/6/14)

On a hot summer morning, 50 women representing 28 countries lined up to run the 26.2 miles of the marathon.  Having had knee surgery just 17 days prior to the Olympic trials, Benoit was not favored to win.  Furthermore, Grete Waitz of Norway had beaten Benoit 10 out of 11 races.  The starting pistol rang out and the pack of runners took flight.  Benoit took a short lead just over 2 miles into the race.  She skipped the first water station increasing her lead, much to the dismay of the commentators.

Joanie is running a very unusual race…It kinda flies in the face of marathon wisdom of the past, of the way most top competitors compete, but Joanie is her own woman. –Bill Rodgers, marathoner and ABC Sports commentator.

Benoit later claimed she was hemmed in by the crowd of runners, and her stride had been compromised.  By pulling ahead, she could run her own race.  Over two hours later she entered the Los Angeles Coliseum to the joyous roar of the crowd.  Never breaking pace, Benoit ran the final lap and into the history books, clocking in at 2:24.52, more than a minute ahead of silver medalist, Grete Waitz.

Since the 1984 Olympics, Joan Benoit Samuelson has authored two books on running.  She also directs running clinics, sponsors a charity run, consults for Nike, and most importantly, continues to run.  Click here to watch her historic final lap in the Olympics:  See Joan Run!