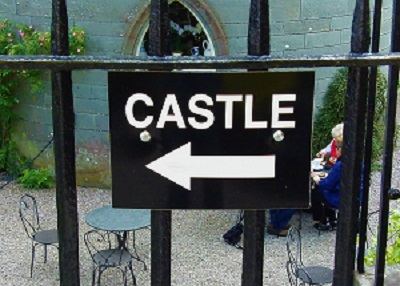 Today, we’re continuing our mad dash through the Scottish Highlands with a visit to Inveraray Castle.  Commissioned by Sir Duncan Campbell, the original Inveraray Castle was built in 1450.  Not much is written about this medieval fortress other than to say it was demolished in 1745 by the current owner, Archibald Campbell, the Third Duke of Argyll.  A year later, the foundation was laid for a new castle and after 43 years of construction, Inveraray Castle 2.0 was complete.

For the next 88 years, castle life fell into a routine, and ownership was successively passed on to Dukes 4 through 8. In the wee hours of the morning on October 12, 1877, lightning struck the castle and sparked a massive fire.  Here is an eye-witness account from George Douglas, Eighth Duke of Argyll (1823-1900), in a letter to Professor Tyndall:

Now the fire was seen blazing at the top of the castle at 5 a.m. I was roused about 5:15, and in another ten minutes the great gas-pipe and gaselier had fallen in with a perfect avalanche of fire upon the floor of the hall, and the flames were rising high above the roof.

Fortunately, everyone got out safely, but the castle was left gutted and charred.  Repairs were made and the third-floor residence and conical towers were added.  In 1953, the lower floors of Inveraray Castle 3.0 were opened to the public.  As luck would have it, in 1975 another devastating fire swept through the castle.  This time ravaging the entire third floor and leaving the twelfth Duke of Argyll and his family without a home.  For several months, the Duke and Duchess lived with their children in the dungeons without running water or electricity.  The castle withstood another bout of hammers and saws and Inveraray Castle 4.0 reopened to the public in 1978.

A remarkable display of muskets, axes, halberds, pole-arms and a host of other pointy devices including Rob Roy MacGregor’s (1671-1734) dirk and sporran, are featured in the Armory Hall.  Rare paintings and tapestries grace the walls.  The opulent dining and sitting rooms are filled with gilded furniture and porcelain.

My brother also picked up on the manor house vibe after a white-knuckle drive (including a standoff with a tour bus!) through the narrow twists and turns of the highlands. He thought a fortress-type castle must be located out sight, but somewhere near the watchtower perched on a steep hill. After purchasing tickets just outside the charming three-story building, he asked the man dressed in full highlander regalia where the castle was located.  The highlander, who just happened to be serving as a doorman to the Inveraray Castle, went off like a bagpipe.

“Castle?!” The highlander thundered, “This here’s the castle!”

Castle or not, Inveraray is a delight. Click here for more photos and a detailed history of the Campbell Clan.

Fun Footsie Facts:  Argyle socks get their name from the Argyll family, the owners of Inveraray Castle.  The diamond pattern is based on the kilts and tartans of the Argyll branch of the Campbell clan.  The current Duke, Torquhil Ian, is not only the Chief of Clan Campbell, he is also the captain of team Scotland in the World Elephant Polo Championships. Yes, that’s apparently a thing.  Click on this elephant polo link to learn more.

Next week I’ll be back at my home base, the Michigan State University Museum where we’ll sneak a peek at the art and history of camouflage. Have a great week!

One thought on “Bro, Where’s the Castle?!”